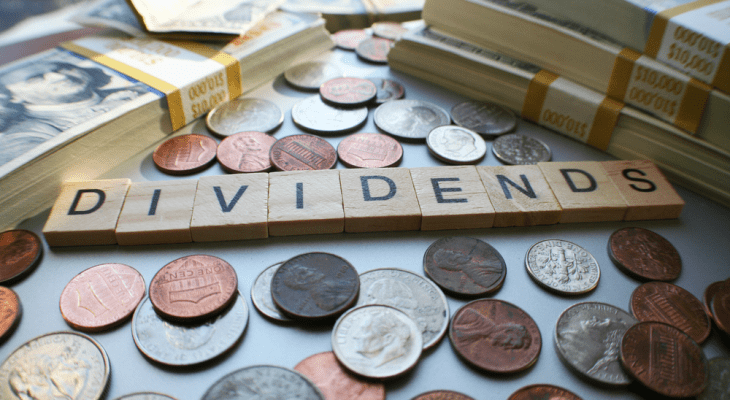 Many investors are encouraged to buy high-dividend stocks to provide income, but some less-established, more economically sensitive companies have been unable to sustain their payouts. Such situations often occur during recessions such as the current one due to the new coronavirus, which causes the COVID-19 disease.

The fallout is substantial, with many corporations suspending or significantly cutting their dividends. In fact, dividends have been suspended more quickly than in past recessions, according to new research from S&P Global Market Intelligence.

2 Dividend Stocks to Buy Stand out Amid Payout Cuts

So far in 2020, 83 companies and publicly traded investment funds, including real estate investment trusts (REITs), have suspended or canceled dividends. It marks the highest annual number tracked by S&P Global Market Intelligence dating back to 2001. In comparison, a total of just 55 companies eliminated their dividends in the previous 10 years.

Another 142 companies reduced their dividends in 2020 to reach the highest number since 2009 when 316 firms trimmed their payouts. But 2020 only has completed its first four months, so the total for this year certainly will grow.

The cumulative effect of the changes is a $23 billion reduction in shareholder income, according to S&P Dow Jones Indices. For income investors, it is a worrying time, especially those who are heavily leveraged to boost their available investment funds.

“There was a lot of forced selling in March because leveraged investors faced margin calls as prices declined,” said Bob Carlson, who is chairman of the Board of Trustees of Virginia’s Fairfax County Employees’ Retirement System with more than $4 billion in assets. “To raise cash, they had to sell assets. They sold high-quality assets because there were no buyers for low-quality assets at the time.”

Carlson, who mostly recommends funds in his Retirement Watch advisory service, said leveraged investors who held high-quality assets dumped them in distress sales. The selling turned the quality assets into “bargains” for others, he added. 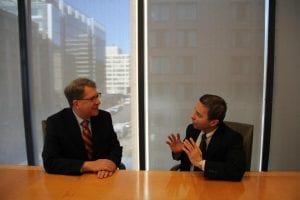 Bob Carlson responds to Paul Dykewicz’s questions during an interview.

The S&P 500, a broad measure of the domestic stock market, shows that since falling to its closing low of 2,237.40 on March 23, the market has come roaring back more than 25% through the close on April 16 of 2,799.55. In a normal market, that remarkable run would signal a “raging bull” that’s trading at all-time highs, said Jim Woods, who leads the Successful Investing , Intelligence Report and Bullseye Stock Trader advisory services.

The fallout is the dividend reductions follow a record high of $491 billion in payouts during 2019. But not all firms are reducing dividends.

Johnson & Johnson Is Among Two Dividend Stocks to Buy 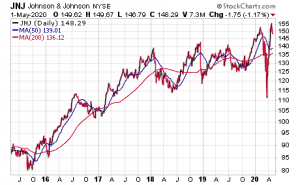 “Dividend stocks can be a good way to play this volatile market downturn,” said Woods, who also chooses recommendations for the Fast Money Alert advisory service that include option recommendations. “However, you must purchase the right dividend stocks. The reason why is because the likely very deep recession caused by the COVID-19 shutdown of the economy could pressure many good companies into either not raising their dividends this year or even cutting their dividends just to survive the massive loss of revenue.”

Johnson & Johnson ranks as one of 30 companies known as Dividend Kings that have boosted their annual payout for at least the past 50 years. Johnson & Johnson announced on April 14 that it raised its dividend from 95 cents a share to $1.01, up 6.3%, beating Wall Street’s earnings and revenue expectations, while scaling back its full-year 2020 financial guidance to adjusted earnings per share of $7.50-$7.90 from $8.95-$9.10. 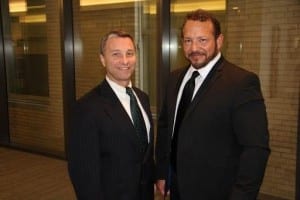 Procter & Gamble, founded in 1837, has paid a dividend during each of the past 129 years since its 1890 incorporation. The company also has a rising dividend policy and has raised its payout each of the past 63 years. 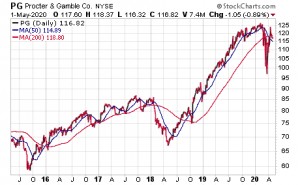 The company’s management reaffirmed its core earnings per share growth would range between 8% and 11% for the full fiscal year. Management’s guidance also indicated its full fiscal year organic sales would rise 4-5%.

Carlson advised that it is important when choosing income investments to look beyond the current yield. A business needs to have a long-term commitment to its dividend and enough strength in its balance sheet to maintain the payout in tough times such as now when revenues fall.