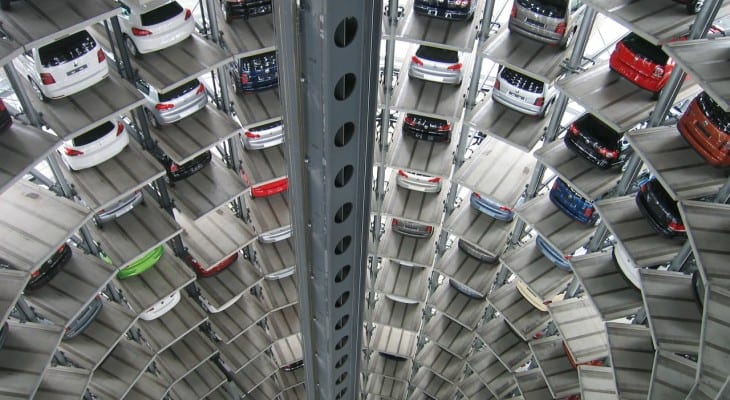 Meanwhile, Takata Corporation (TYO:7312) had to recall almost 70 million defective air bags and the Volkswagen Group (FWB:VOW) is currently under investigation for manipulating emission tests on their vehicles equipped with diesel engines. The auto industry typically is cyclical but Takata and Volkswagen are facing challenges as their competitors are profiting and rewarding their shareholders.

After a decades-long uptrend, Toyota’s share price was cut in half over 18 months following its 2007-2008 recall for sudden unintended acceleration on some of their vehicles. After four years of marginal movement, its share price increased back up to previous levels and reached a new all-time high in the first quarter of 2015.

Toyota pays varying dividend amounts twice per year. Following a seven-year rising dividend streak, Toyota cut its dividend payouts in 2009 and again in 2010. However, the company resumed the rising dividends program in 2011 and has increased its annual dividend every year since. Indeed, 2016 marked the sixth consecutive year of dividend increases.

Honda’s quarterly dividend payouts translated to its $0.8433 annual dividend per share in 2016. The annual yield for 2016 is 2.8%, which is 9% higher than the 2015 annual payout. Over the last 20 years, Honda failed to increase the annual dividend only four times. The company’s share price increased 123% over the same 20-year period.

Since September, its share price fluctuated considerably and dropped as low as 10% below the 52-week high. However, as of January 13, 2016, the most recent closing price was $30.08 — just 3.5% below the September high.

Ford reduced its dividend payout most recently in 2012. Since then, the company’s annual dividend increased every year. Its current dividend yield of 4.8% is almost 30% higher than the 3.7% five-year average.

Ford’s share price fluctuated between $11.02 and $14.22 during the past 52 weeks. The price rose almost 30% from the low in February to the 52-week high at the end of April. Subsequently, its share price declined 15% by the end of June and then rose back up in less than a month to near-peak level by the end of July.

By early November, its price was down again to within 3% of the 52-week low. Since then, Ford’s share price recovered some of the loss and it currently is 11% lower than its 52-week high from April 2016.

General Motors (GM) still carries debt from its 2009 Chapter 11 bankruptcy restructuring. However, as part of the restructuring, GM can carry forward more than $45 billion of losses through 2030 to offset against future taxes, which could help the company’s earnings going forward.

On January 10, 2017, GM announced its 2017 earnings outlook of $6.00-$6.50 per share, which is $0.50 higher than the outlook for 2016. GM’s CEO Mary Barra announced a $1 billion increase to GM’s cost efficiency target and the authorization of an additional $5 billion for share repurchase. GM will present its 2016 fourth-quarter business results at a conference call scheduled for Tuesday, February 7, 2017.

Since the restructuring, GM’s share price experienced a lot of volatility. Its share-price low dipped below $20 in July 2012 and topped $40 in December 2013.

The restructured company resumed paying dividends in 2014. Its dividend payout increased by double-digit percentages each year over the last two years. GM’s current quarterly dividend payout of $0.38 is equivalent to a $1.52 annual dividend and a 4.1% dividend yield.

Ned Piplovic is the assistant editor of Website Content at Eagle Financial Publications. He graduated from Columbia University with a Bachelor’s degree in Economics and Philosophy. Prior to joining Eagle, Ned spent 15 years in corporate operations and financial management. Ned writes for www.DividendInvestor.com and www.StockInvestor.com.