4 Energy Stocks Going Ex-Dividend Next Week You Should Consider 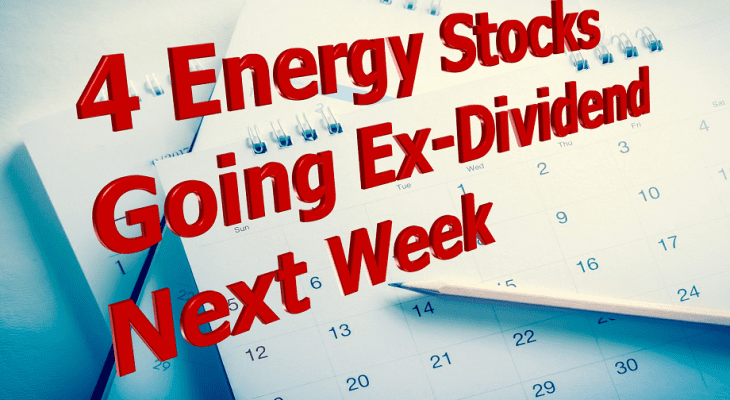 Any analysis of markets and underlying securities can be made very complex to enhance the prospect of choosing the best stocks for a particular portfolio strategy. Many brokers and financial consultants, as well as providers of financial advisory sites offer a variety of tools, such as the Dividend Screener tool available at DividendInvestor.com.

However, the selection of the four equities on the list below involved just three criteria — ex-dividend dates between Nov. 11 and Nov. 16, one-year total return that is higher than the current dividend yield and classification as a company in the Energy sector.

Sorted by dividend yield in ascending order, below are the four energy companies going ex-dividend next week investors should consider.

4 Energy Stock Going Ex-Dividend Next Week You Should Consider: #4

Headquartered in Brentwood, Tennessee, and founded in 2001, Delek US Holdings, Inc. engages in the integrated downstream energy business in the United States. The company focuses on petroleum refining, as well as the transportation, storage, wholesale distribution and retailing of crude oil, intermediate and refined products in Arkansas, Louisiana, Texas and New Mexico. In addition to five refineries and two biodiesel facilities, the company also owns and operates approximately 1,500 miles of pipelines and associated storage facilities with a total capacity of nearly 10 million barrels.

The company has boosted its quarterly period in each of the last four quarters and six times in the last two years. The $0.30 quarterly payout for the upcoming pay date in early December is 3.4% higher than the most recent $0.29 distribution at the beginning of September. This upcoming payout amount is equivalent to a $1.20 annualized amount and a 3% forward dividend yield.

4 Energy Stock Going Ex-Dividend Next Week You Should Consider: #3

Headquartered in Houston, Texas, and tracing its roots to 1875, Phillips 66 operates as a diversified energy manufacturing and logistics company. The company processes, transports, stores and markets fuels and products globally through four segments — Midstream, Chemicals, Refining, and Marketing and Specialties (M&S).

Phillips 66 has boosted its annual payout every year since beginning dividend distributions in 2012. Since then, the company has enhanced its annual distribution amount four-fold. This level of advancement corresponds to an average growth year of nearly 22% per year.

The current $0.90 quarterly dividend is 12.5% higher than the $0.80 payout from the same period last year. This new quarterly amount is equivalent to a $3.60 annualized distribution and a 3.0% forward yield, which is 7.7% higher than the company’s own 2.81% average yield over the past five years.

Since beginning dividend distributions as an independent business entity in 2012, Phillips 66 has enhanced its total annual dividend amount nearly four-fold. This pace of advancement corresponds to an average growth rate of 21% per year over the past seven consecutive years.

After declining significantly between August 2018 and late-May 2019, the share price has regained almost all of those losses. Combined with the rising dividend payouts, the recovering share price delivered a total return of 24% just over the trailing 12-month period. Longer-term shareholders enjoyed even better total returns of 64% over the last three years and nearly 80% over the five-year period.

4 Energy Stock Going Ex-Dividend Next Week You Should Consider: #2

Tracing the beginning of its dividend distributions back to 1913, Chevron has delivered annual dividend boosts for the past 33 consecutive years. Just over the past two decades, the company enhanced its total annual dividend nearly four-fold, which corresponds to a 7% average annual growth rate.

Additionally, the company lowered its dividend payout ratio from the 220% average over the past five years and 82% last year to the current 61% payout ratio. While still slightly above the 50% level considered sustainable, Chevron’s payout ratio is moving in the right direction, which indicates that the company’s earnings should be sufficient to cover future dividend hikes.

4 Energy Stock Going Ex-Dividend Next Week You Should Consider: #1

The $0.52 quarterly payout for the upcoming distribution is 1% higher than the $0.515 payout from the previous period. This new payout amount corresponds to a $2.08 annualized payout and a 9.7% forward dividend yield, which is nearly 12% higher than the company’s own five-year yield average of 8.69%.

The share price lost more than one-third of its value between the company’s formation in 2014 and early 2016. However, since reaching its all-time low below $17 in early-February 2016, the share price has experienced some volatility while riding a relatively steady uptrend and has gained 28% since the beginning of 2016.

Just over the trailing 12 months, the asset appreciation contributed a few basis points to push the 9.7% dividend yield into a total return in double-digit territory and deliver a 12% total return. The 2015 price correction limited the five-year total return to less than 30%. However, the three-year total return is currently more than 56%.