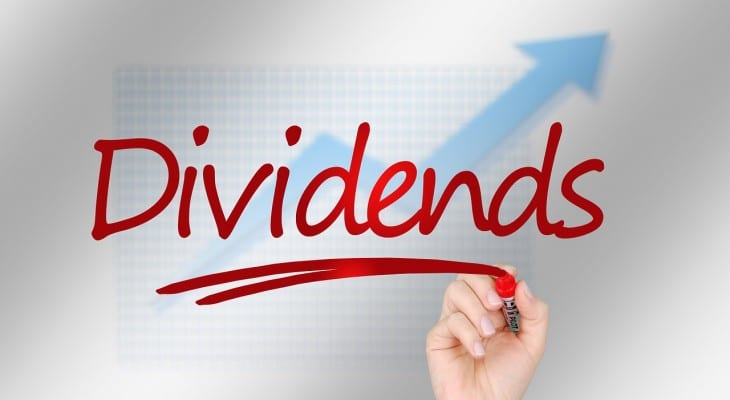 Investors looking for equities that offer balanced returns from dividend income and asset appreciation should consider one of the five dividend-paying stocks that have delivered a total return of more than 100% just over the trailing one-year period.

While nearly 50 equities doubled shareholders’ investment over the past year, the securities included in the list below meet additional criteria. This ensures that the companies included here are more likely to offer sustainable dividend income and capital gains.

All five companies offer dividend yields in excess of 2%. Ranging from 2.05% to 4.37%, the simple average of all five yields is 3.24%. While three of the five companies have not raised their dividend distribution in the past 12 months, one company has a current streak of eight consecutive annual dividend hikes, and one company has boosted its annual dividend for the past 51 consecutive years. Despite no recent dividend hikes from two-thirds of companies in this group, the one long streak pushes the average streak of consecutive dividend boosts to nearly a dozen years.

To ensure sustainability of dividend income payouts, the highest dividend payout ratio among the five securities listed below is 57%. Generally, investors consider 50% to be the upper limit of the sustainable range. A ratio that is too low indicates that the company does not distribute a significant portion of its earnings to be attractive to income-seeking investors. While there are certainly exceptions to the rule based on specific situations and specific individual portfolio goals, investors generally look for a minimum payout ratio of 30%.

Alternatively, a payout dividend ratio in excess of 50% indicates that the company uses more than half of its earnings to cover dividend distributions. While most companies can occasionally pay more than 50% of its earnings as dividends, it is nearly impossible to sustain a payout ratio in excess of 50% over extended periods. However, the 50% is just a general guideline for overall markets. The upper limit for a sustainable payout ratio also varies by sector, industry and other factors. The five equities below have payout ratios right around that upper limit and range from 42-57%, with a simple payout ratio average of 49%.

In ascending order by their respective one-year return, here are the five dividend-paying stocks that delivered 100%-plus total return in one year

5 Dividend-Paying Stocks That Delivered 100%-Plus Total Return in One Year: #5

The company’s share price experienced above-average volatility and declined from its all-time high above $53 in March 2015 to its all-time low under $20 by November 2016. After another significant decline in late 2018, the share price nearly doubled over the trailing one year. The combined regular and special dividends paid during the year were just enough to push the total return marginally over the 100% mark of the last 12-month period. Without any dividends before 2019, the 60%-plus share price pullback from early 2015 through late 2016 delivered a total return of less than 26% over the last five years. The timing of the all-time low in late 2016 resulted in a total return of 106% over the last three years.

5 Dividend-Paying Stocks That Delivered 100%-Plus Total Return in One Year: #4

Based in Hong Kong, the Seaspan Corporation operates as an independent charter owner and manager of containerships. The company’s current $0.125 quarterly dividend payout is equivalent to a $0.50 annualized payout and a 3.5% dividend yield at the current share price level. While only slightly lower than the 3.9% average yield of the overall Shipping industry segment, Seaspan’s current yield is almost 65% higher than the 2.12% yield average of the entire Services sector.

During the first half of the trailing five-year period, the company’s share price declined more than 70%. However, since reversing direction in May 2017, the share price rose almost 170% and recovered nearly 70% of its previous losses. Dividend income covered the gap and managed to maintain the five-year total return in positive territory with 1.5%.

5 Dividend-Paying Stocks That Delivered 100%-Plus Total Return in One Year: #3

Aircastle — a holding company that acquires, leases and sells commercial jet aircraft — has been paying dividends since 2006. While forced to cut its dividend payouts in the aftermath of the 2008 financial crisis, the company began its current streak of nine consecutive annual dividend hikes in 2011. Over the past nine years, Aircastle has enhanced its annual payout amount more than three-fold, which corresponds to an average annual dividend growth rate of 13.8% per year.

The most recent dividend hike for the December 2019 distribution raised the quarterly payout 6.7% from $0.30 in the previous period to the current $0.32 quarterly payout amount. This new distribution amount is equivalent to an annualized payout of $1.28 per share. This annual payout corresponds to 4% forward dividend yield, which is 90% higher than the 2.12% average yield of the company’s peers in the entire Services sector.

5 Dividend-Paying Stocks That Delivered 100%-Plus Total Return in One Year: #2

However, the company has increased its annual payout this year. The $1.36 annual dividend per share in 2019, corresponds to a 4.35% forward dividend yield, which is 8.6% higher than the 4.02% simple average yield of the Asset Management industry segment, as well as 5.6% above the 4.12% yield average of the overall Financials sector.

5 Dividend-Paying Stocks That Delivered 100%-Plus Total Return in One Year: #1

As one of just 16 S&P 500 Dividend Kings, the target corporation has rewarded its shareholders with more than five decades of consecutive annual dividend hikes. Just over the past two decades, the company has boosted its annual dividend payout more than 13-fold. This advancement pace is equivalent to an average annual dividend growth rate of nearly 14% per year.

The current quarterly dividend of $0.66 is 3.1% higher than the $0.64 payout from the same period last year. This new quarterly amount corresponds to a $2.64 annualized payout and currently yields 2.05%, which is in line with the average yield of the overall Services sector but outperformed the 1.32% simple yield average of the Discount & Variety Stores industry segment by more than 55%.

The share price more than doubled on its own and combined with the dividend income distributions for a total return of 113% over the trailing 12-month period. Driven by a share price pull back from 2015 to 2017, the total returns over the last three and five years were slightly lower in the mid-80% range.

Dividend-paying stocks, dividend increases and dividend decreases, new dividend announcements, dividend suspensions and other dividend changes occur daily. To make sure you don’t miss any important announcements, sign up for our E-mail Alerts. Let us do the hard work of gathering the data and sending the relevant information directly to your inbox.