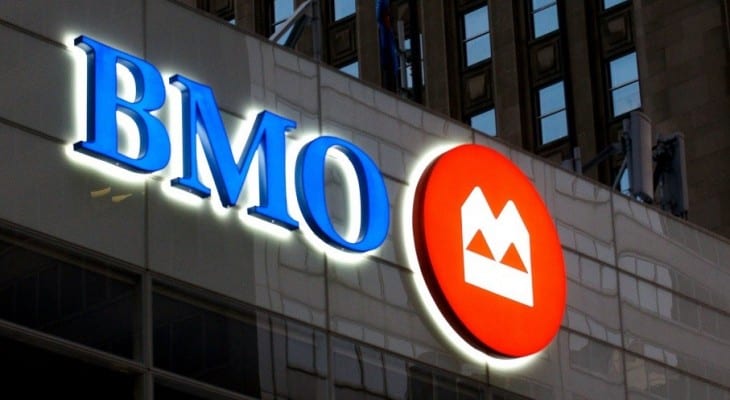 The Bank of Montreal (NYSE:BMO) boosted its quarterly dividend 3% versus the previous period and currently offers a 4.1% dividend yield, which exceeds the Financial sector’s yield average by nearly 40%.

The company started paying dividends 190 years ago in 1829. During the most recent financial crisis that began in 2008, many banks were forced to drastically cut or eliminate dividends altogether. However, the Bank of Montreal was able to weather the crisis without dividend cuts and merely paid a flat $2.14 (CA$2.80) annual dividend from 2008 to 2011. After distributing flat dividend distributions over those four years, the bank started its current streak of consecutive annual dividend hikes in 2012.

In addition to the most recent dividend hike and nearly a decade of consecutive dividend boosts, the Bank of Montreal enhanced its share price nearly four-fold since hitting its 15-year low in the aftermath of the 2008 financial crisis. While experiencing increased volatility over the last few years, the share price is still nearly 60% higher than it was at the beginning of 2016, as well as up 20% since the beginning of 2019.

While the Bank of Montreal maintained a long history of sound financial performance and asset appreciation, some analysts expressed doubts about Bank of Montreal’s future success when the company announced in 2017 that Bill Downe — the bank’s Chief Executive Officer (CEO) over the previous 10 years — would retire at the end of that year. However, Darryl White — the former Chief Operating Officer (COO) and the new CEO that replaced Bill Downe when Mr. Downe retired at the end of October 2017 — stated that the company will continue its current course.

In a mid-2017 interview with Francine Lacqua on “Bloomberg Surveillance,” Downe emphasized that at least for the near future, the bank’s business strategy “will look reasonably similar to the one that we’ve seen… in the last 10 and 20 years.” Dawne also mentioned that in terms of new opportunities, he sees the fastest expansion in the United States. The Bank of Montreal followed through on Mr. Dawne’s prediction about expansion into the U.S. market. The company’s most recent addition was the launch if a second commercial banking unit in North Texas at the end of June 2019.

Founded in 1817, the Bank of Montreal provide diversified financial services through its 1,500 branches and operates through three groups — Personal and Commercial Banking, Wealth Management and BMO Capital Markets.

In addition to the Canadian market, the bank has offered services in the United States since 1882. The BMO’s fully owned U.S. subsidiary — BMO Harris Bank — currently has over 600 branches and 1,300 ATMs in eight states. While the United States and Canada account for majority of its operations, the bank has expanded its presence to all continents. I addition to United States and Canada, BMO currently has branch offices in western Europe, East and Southeast Asia, United Arab Emirates, Brazil and Australia.

The bank’s most recent dividend boost raised the quarterly distribution 3% from $0.7635 (CA$1.00) in the previous period to the current $0.7864 (CA$1.03) quarterly dividend distribution. This new quarterly payout amount corresponds to a $3.15 (CA$4.12) annualized payout and translates to a 4.1% forward dividend yield.

To take advantage of the increased dividend payout, interested investors must claim stock ownership before the company’s upcoming ex-dividend date on July 31, 2019. The Bank of Montreal will distribute the next round of dividend distribution to all eligible shareholders on the August 27, pay date.

Amid moderate volatility, the bank’s share price entered the trailing 12-month period on a short uptrend that began in April 2018. After gaining 7% in little more than two months, the share price reached its 52-week high of $83.81 on September 21, 2019. However, downward pressure from the overall market correction in late 2018 pushed the share price down for the remainder of that year.

After giving back its mid-2018 gains, the share price plunged an additional 19% and reached $63.51 by December 24, 2019. In addition to a 52-week low, this was also the lowest price level since November 2016. However, after bottoming out on Christmas Eve, the share price reversed direction and embarked on a steady uptrend. The share price recovered more than 60% of its losses in late-2018 and advanced to close at $76.04 at the end of trading on July 8, 2019. While still approximately 8% short of the 52-week high from September 2018, and 2% lower than it was one year earlier, the share price has risen nearly 21% since its 52-week low in late-December 2018.