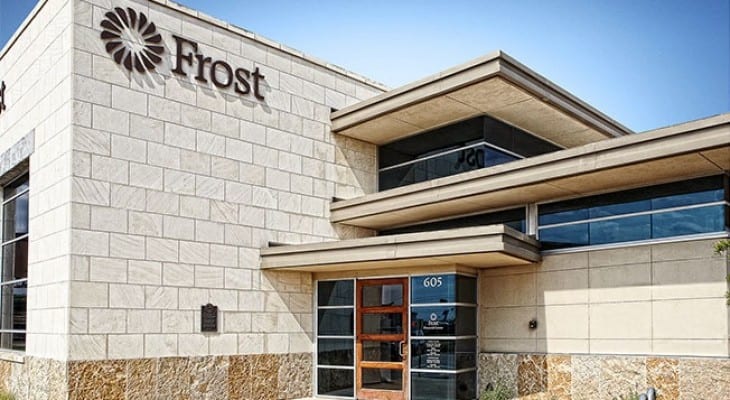 Cullen/Frost Bankers, Inc. (NYSE: CFR) — a regional bank in Texas — has been boosting its annual dividend distribution payments for the past 25 consecutive years

With a quarterly dividend of $0.67 expected to be paid in September, Cullen has grown its quarterly payout by more than four times what it was two decades earlier. In the past year, the annual distribution grew by nearly 6%, but simultaneous share price growth of more than 30% suppressed the yield more than 13% below its five-year average.

That said, the company’s dividend payout ratio of 38% is well within the sustainable range, indicating that earnings are currently more than sufficient to cover the quarterly dividend distribution payouts, as well as support continued annual dividend hikes. Twenty-five years of rising annual dividend payouts, an average annual dividend growth rate of 5% over the past five years and some strong asset appreciation in recent years make this stock an attractive choice for investors seeking equities that provide a blend of income and capital growth, with a minor bias towards capital growth.

Cullen/Frost Bankers will pay its next quarterly dividend on September 14, 2018 to all eligible shareholders of record before the August 30, 2018 ex-dividend date.

Headquartered in San Antonio, Texas and founded in 1868, Cullen/Frost Bankers, Inc. operates as the holding company for Frost Bank that offers commercial and consumer banking services across multiple regions in Texas. The company currently has operations and branches in the Austin, Corpus Christi, Dallas, Fort Worth, Houston, Permian Basin, Rio Grande Valley and San Antonio regions. As of June 30, 2018, the bank had more than $30 billion in assets, which places the company among the 50 largest U.S. banks. Through its two segments, Banking and Frost Wealth Advisors, the bank offers consumer and commercial banking services. The services include checking accounts, savings programs, automated-teller machines (ATMs), installment and real estate loans, home equity loans and lines of credit, drive-in and night deposit services, safe deposit facilities and brokerage services. The bank also provides international banking services, such as issuing letters of credits, handling foreign collections, transmitting funds and dealing in foreign exchange. Currently, the company operates more than 130 financial centers and approximately 1,200 ATMs.

After paying out a $0.57 per share dividend in the first quarter of the year, Cullen followed company tradition by hiking the dividend payout in the second quarter. As a result, the last CFR dividend, and the upcoming one in September, were $0.67 per share, more than 17% above the prior $0.57 payout. This new quarterly distribution is equivalent to a $2.68 annualized amount and a 2.4% forward dividend yield. While this yield trails the average yield of the overall Financials sector by 20%, it is more than 37% ahead of only dividend-paying companies in the Southwest Regional Banks industry segment and nearly 60% higher than the 1.49% simple average yield of all the companies in the segment.

Due to the rapid growth of the annual dividend in the early stages of the current 25-year streak, Cullen advanced its total annual dividend distribution amount almost 18-fold and maintained a 12.2% average annual growth rate over that period. While the year-over-year increase amount remains relatively steady, the growth rate has naturally declined to an average of 5.7% over the past decade. However, that growth rate is still represents a significant enhancement to the dividend payout year after year.

Combine very impressive asset appreciation with the dividend income over the last year and CFR shareholders saw a total return of more than 37% over the past 12 months. The three-year total return was nearly twice as high, at almost 74%.