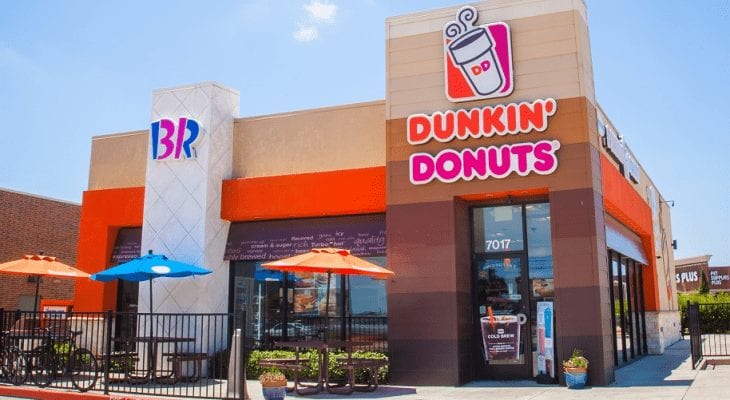 The parent company of Dunkin’ Donuts and Baskin Robins raised its annual dividend distribution at a 16.5% annual growth rate for the last five consecutive years and currently offers its shareholders a 2.2% yield.

In addition to the steady dividend growth over the last several years, company’s share price appreciated 24% over the last 12 months. The share price spiked recently on investor speculation that a competitor’s parent company might attempt to acquire Dunkin’ Brands.

While the company’s dividend rewarded shareholders with a slow but stable growth over the last five years, the share price experienced much more volatility over the same period. The share price began the trailing 12 months with its 52-week low of $46.78 and rose 26% by the time it reached $59.04 on June 2, 2017, which was the new 52-week high at the time. However, immediately after the June peak, the price reversed trend and started falling. The share price fell to $51.33 by September 8, 2017, which was less than 10% above the 52-week low from November 2016. Fortunately for the shareholders held on to the shares, the price fully recovered by the end of October and closed on October 30, 2017 at its new 52-week high of $59.09. The 24% share price climb over the last 12 months accounts for 28% of the total asset appreciation over the past five years.

The share price spiked 8% in single trading session on October 30, 2017 on investor speculation that the European investment fund JAB Holding Co. – owner of Krispy Kreme, Stumptown Coffee Roasters, Keurig Green Mountain and Panera Bread Co. – might be interested in acquiring Dunkin’ Brands. Over the past year, this is the third time that a potential JAB Holding Co. acquisition made the news.

However, these acquisition speculations might not be the sole reason for the recent price spike. Dunkin’ Brands released its third quarter results on October 26, 2017 and announced an 8.2% revenue increase compared to the third quarter last year. Additionally, the company revealed operating income growth of 11%, some of which was offset by higher tax expense from a recent debt refinancing deal. On another positive note, the company increased its diluted adjusted earnings per share (EPS) from the estimated $0.60 to $0.61.

Whether the share price spiked because of the acquisition speculations, positive quarterly results or a combination of both, the substantial asset appreciation is a nice complement to the rising dividend income. The combination rewarded shareholders with 24%, 37% and 108% total returns over the last one, three and five years, respectively.