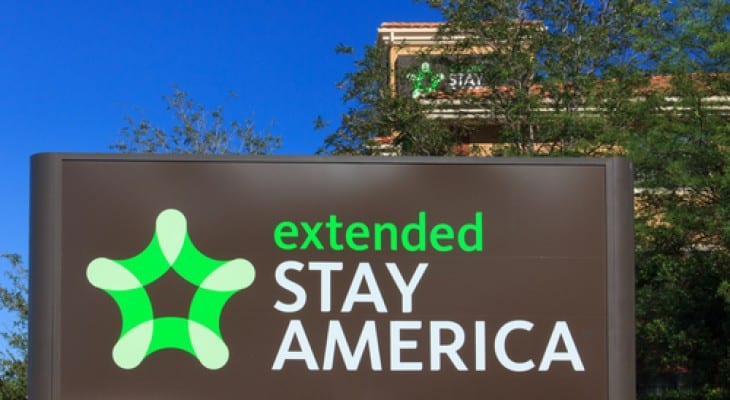 In addition to its rising dividend income and an upcoming 4.8% increase to its quarterly dividend, Extended Stay has provided its shareholders with a decent asset appreciation that, including dividend payouts, equates to a total return of more than 15% over the past 12 months.

Investors who believe that the share price will continue to pay similar rewards in the near future should look to take a position in the company prior to the next ex-dividend date on May 10, 2018. Investing before that date will ensure an investor’s eligibility for the next round of dividend distributions on the May 25, 2018 pay date.

Headquartered in Charlotte, North Carolina and founded in 1995, Extended Stay America, Inc. owns, operates and manages long-term-stay lodging facilities in the United States. The company listed its shares initially on the NASDAQ exchange in 1995. In 2004, the Blackstone Group purchased all of Extended Stay America’s assets and debts, in the process expanding the number of locations by 28% over the following years. However, the 2008-2009 financial crisis dramatically reduced business travel — Extended Stay America’s primary source of revenue — and the company entered Chapter 11 bankruptcy reorganization proceedings in June 2009. The company emerged from its reorganization in late 2013, completed an initial public offering (IPO) and listed its shares on the New York Stock Exchange. As of March 2018, the company wholly owned and operated 599 hotels and managed an additional 26 hotels with a combined capacity of nearly 70,000 rooms.

Now, for the dividend yield, STAY is going to increase its quarterly dividend payout 4.8% from the previous quarter’s $0.21 per share amount. This new quarterly distribution corresponds to an $0.88 annualized amount and a 4.5% yield, which is 28.4% above the company’s own five-year average yield of 3.5%. Additionally, Extended Stay America’s 4.5% yield is 120% above the 2.04% simple average yield of the entire Services sector and the highest yield in the Lodging industry segment.

Since 2013, Extended Stay America has advanced its total annual distribution 66%, going from the $0.53 annual payout in 2014 to the current $0.88 payout for 2018. That level of dividend advancement is equivalent to an average growth rate of 13.5% per year.

On the share price front, nearly two-and-a-half years after its IPO, Extended Stay’s share price lost more than half of its value, reaching an all-time low in February 2016. However, the share price has been on a long-term, steady uptrend since then and has recovered nearly 85% of its losses.