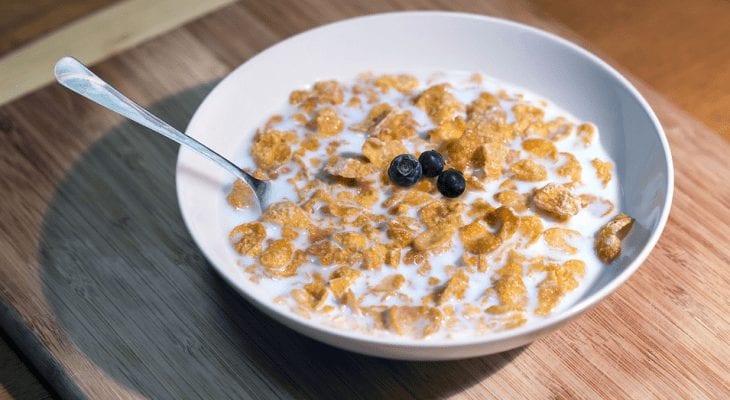 The current dividend yield is significantly higher than the company’s five-year average and also outperforms the average dividend yield of its industry peers by a wide margin. Unfortunately, while the steady annual dividend boosts contributed a small portion of the dividend yield increase, the main driver was a 37% share price decline from the company’s all-time high of nearly $72.50 on July 2016.

The company’s share price hit its 52-week low in the beginning of May 2018 and has started rising again. While General Mills beat earnings per share (EPS) estimates in its financial results release for the full fiscal 2018, which ended May 27, 2018, the company reduced its organic sales growth outlook for fiscal 2019 from 2-3% to just 1% and estimated its EPS would “range between flat and down 3 percent from the base of $3.11 earned in fiscal 2018.”

To meet its outlook for 2019, the company plans to cut 625 jobs as part of its cost-cutting initiatives, introduce new products to its struggling Yoplait division and take full advantage of the April 2018 acquisition of pet food maker Blue Buffalo, whose net sales are expected to grow 9% to 10%.

Investors convinced that the company’s share price could rise should consider taking a position before the company’s next ex-dividend date      on July 9, 2018. That would ensure eligibility for the next round of dividend distributions on the August 1, 2018, pay date.

Based in Minneapolis, Minnesota, General Mills, Inc. was created in 1928 when the Washburn-Crosby Company merged with 28 other regional mills to form General Mills. The company manufactures and markets branded consumer foods, such as ready-to-eat cereals, refrigerated yogurt, soup, meal kits, refrigerated and frozen food products, shelf stable and frozen vegetables, ice cream and frozen desserts. Additionally, the company offers grain, fruit and savory snacks as well as various organic products, including nutrition bars, meal kits and salty snacks. Some of the company’s largest and most recognizable brands include Betty Crocker, Häagen-Dazs, Yoplait, Old El Paso, Pillsbury, Progresso, Annie’s and Bisquick. Additionally, the company owns multiple ready-to-eat cereal brands, such as Cheerios, Chex, Wheaties, Lucky Charms, Cocoa Puffs, Kix, Cookie Crisp, Fiber One and Trix. The company also operates 55% of its nearly 800 branded ice cream parlors with the remaining parlors operated as franchise stores. While best known for its cereals, in 2017 the company generated the largest share of its sales from snacks (21%) and only 17% of its revenue from cereals. The company generated another 17% of its revenue from ready-to-eat meals and 15% from its Yoplait yogurt division. These four segments account for 70% of the company’s revenue.

The company’s share price started the trailing 12-month period with an initial downtrend before reversing direction and reaching its 52-week high of $60.20 for a gain of nearly 26% above its June 2017 price levels. However, the share price reversed direction immediately after reaching its peak and fell almost 31% before bottoming out at its 52-week low of $41.21 on May 3, 2018.

After bottoming out in early May 2018, the share price reversed direction once more and rose 11% to close on June 27, 2018, at $45.73, which was still more than 17% short of its June 2017 level and even 7% lower than it was five years ago but continues its ascent and might recover enough to support the rising dividend income in generating double-digit percentage total returns, like the 15.3% five-year total return on shareholders’ investment.

Since starting its streak of consecutive annual dividend hikes 14 years ago, the company has enhanced its total annual dividend more than 250%. This level of advancement corresponds to an average annual growth rate of 8.8% per year.