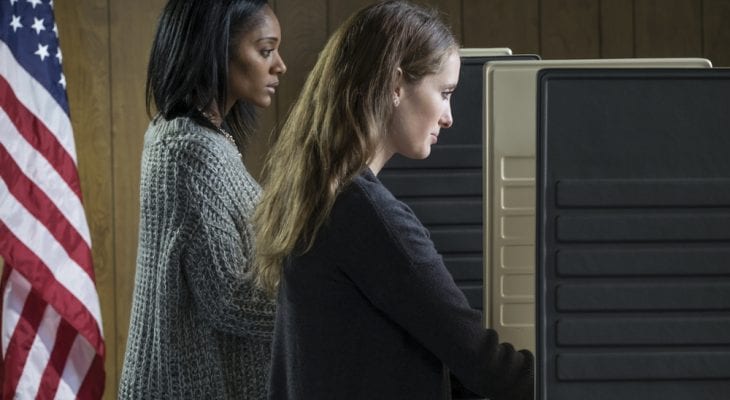 Stocks are trading firmly higher as we head into what is seasonally a good time of the year to be long in the market.

Black Friday specials started last weekend. I went to Home Depot (NYSE:HD) and picked up a pressure washer on sale to clean my deck on what was a warm weekend in Virginia.

For some, power washing is a very fulfilling experience. Seeing the dirt and grime go away feels a lot like when millions of voters probably took a long hot shower after the polls closed on Nov. 3.

The final recounts look to be in, but there are legal cases pending that are looking more like a pretty good movie in the making. Dominion Voting Systems and Smartmatic voting machines are the targets of allegations of widespread election integrity issues, and whether former federal prosecutor and ex-Trump attorney Sidney Powell can prove ballot tampering is yet to be seen.

Powell’s team will file for evidentiary hearings in all the swing states where she will present her findings. She is taking on a tall task where momentum is clearly not in her favor.

In addition, Powell went through absolute hell for three years defending General Michael Flynn to where his case was dismissed, and he was exonerated. Powell’s close friends describe her as smart, fearless and intensely driven to expose the deep state for its domestic and global corruption.

She claims, “sophisticated election rigging has been going on all around the world to keep tyrants and global interests that have just lined their pockets while they’ve raped their own countries and treated their people horribly.” That’s a bold statement coming from a lawyer that beat back the FBI and won.

For what it’s worth, this past weekend, Dominion has shut down and moved its offices in Denver and Toronto, where they shared space with a Soros entity, and over 100 of their employees have taken their names off of LinkedIn, eliminating any affiliation with either company. Powell said she’s hoping a lawsuit will be filed “by next week,” which will officially begin the court process to prove voter fraud was rampant earlier this month.

Conspiracy or just conspiracy theory, that is the question. My guess is that there is some corroborating evidence among those who have signed affidavits and are willing to testify in whatever court proceedings might materialize, but this election process is like a train that has left the station and is moving down the track for Joe Biden.

It would take a quantum legal path straight to the Supreme Court before the nation or the market would seriously embrace this course of action by Ms. Powell. Time is not on her side. She has until Dec. 3 to file her case, per electoral rules, and many reputations are on the line if nothing comes of these actions. So, short of a legal miracle unfolding and possibly the greatest crime in American history being unveiled, it looks like Joe Biden will have the keys to the White House starting on Inauguration Day, Wednesday, Jan. 20.

A win by Democrats in the Jan. 5 run-off election for both of Georgia’s Senate seats would be a game-changer for sure. If that happens to give Democrats control of the U.S. Senate, investors are keenly aware of a higher corporate income tax becoming a done deal. For everything else that is on the Biden platform, and the list is long, this is the most important one for the stock market.

Biden’s plan to raise the corporate income tax rate from 21% to 28% will likely bring about a period of volatility. How much? Maybe not much. The inertia of money flowing into U.S. stocks of well-run companies is tremendous. And a short-term pullback to adjust earnings to reflect a higher tax rate likely will occur.

However, those same well-run companies in industries enjoying secular growth trends will still experience top-and-bottom-line growth that will invariably move good stocks higher. This election process has shown that there are willing investors stepping in to buy during the dips of each market decline. The world is awash in liquidity and investors are buying equities.

Back to Georgia. There is clearly election fatigue that is only surpassed by COVID-19 fatigue. This runoff election is attracting money that will run well over $100 million in ad campaigns. But voter turnout in runoff elections in Georgia — and across the country — is typically lower than in the preceding general election. It is always a challenge for candidates to convince voters who are tired of politics to go back to the polls so soon after a long, divisive general election season.

In 2008, 2.1 million people voted in Georgia’s Senate runoff election between then-Sen. Saxby Chambliss, the Republican incumbent, and Democrat Jim Martin. That represented a nearly 50 percent drop in the turnout rate from the general election. (source: www.pbs.org). But this is no ordinary in-state Senate election — it’s an election to determine whether a very progressive agenda is green-lighted in Washington.

One other factoid that could sway the vote count in either direction is that there is not a length of residency requirement for voters in Georgia, so anyone who moves into the state can register to vote on day one. However, moving to Georgia with the express purposes of voting without any intent to remain a resident is illegal and can result in prosecution.

How the state would prove these cases is a puzzle in itself and I have doubt about whether government officials would prosecute thousands of new residents if they tried to exploit the system just to vote. States are strapped for cash from the pandemic and this would be a high-cost endeavor.

I just want to express that powerful market fundamentals support higher stock prices even if Congress goes blue. And if people don’t like what comes of it, they’ll vote them out of the House of Representatives in 2022. It’s just that simple.