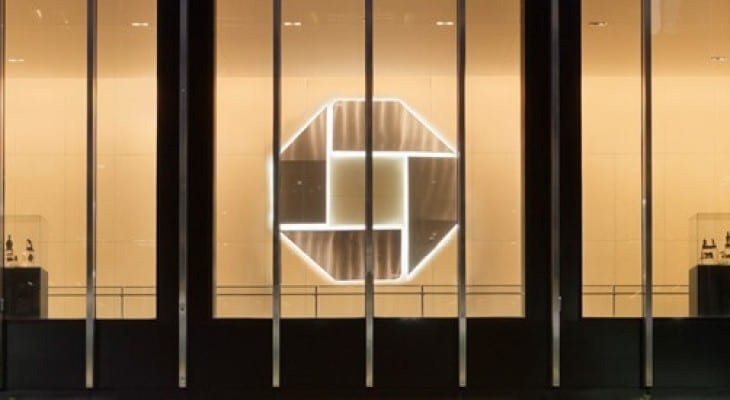 After a few years of paying flat dividends leading up to the financial crisis and cutting its annual dividend payout by a combined 98% in 2009 and 2010, JPMorgan Chase’s annual dividend has fully recovered and has exceeded the annual payment amount from 2008 since 2014.

Additionally, the company’s share price rose more than 25% over the past 12 months and combined with the dividend distribution for a one-year total return of almost 30%. The company’s next ex-dividend date is fixed for January 4, 2018, and the pay date will follow just a few weeks later, on January 31, 2018.

The company hiked its quarterly dividend distribution last period and the current annualized payout of $2.24 for 2018 is 9.8% higher than the $2.04 actual dividend paid in 2017. The current quarterly distribution is $0.56 and yields 2.1%. The dividend yield is slightly suppressed by the company’s rapidly advancing share price.

The company’s current 2.1% yield is more than 40% lower than the average of the entire financial sector. However, real estate investment trusts (REITs) and master limited partnerships (MLPs) tend to drive the sector’s average yield higher. Compared to the 2.07% average yield of its peers in the Money Center Banks segment, JPMorgan Chase’s 2.1% yield is much more favorable.

In 2011, JPMorgan Chase started rebuilding its dividend payouts. The total annual amount reached and exceeded the 2008 total payout by 2014 and continued to enhance its annual dividend every year afterwards. Since resuming the annual dividend hikes, the company has boosted its total annual distribution at an average growth rate of 35.3% per year. The current annualized payout of $2.24 is more than 11-fold higher than the $0.20 annual dividend that the company paid in 2010.

Just like the dividend dropped during the 2008-2009 financial crisis, the company’s share price lost more than half of its value between mid-2007 and early 2009. The share price slowly recovered and was back to pre-crisis levels by 2013. However, the accelerated share-price growth happened over the past 18 months.

The company’s shareholders enjoyed the combined benefit of steady cash income and asset appreciation as a 29% total return on investment over the past 12 months, with three-year and five-year total returns coming in at 84% and 164%, respectively.