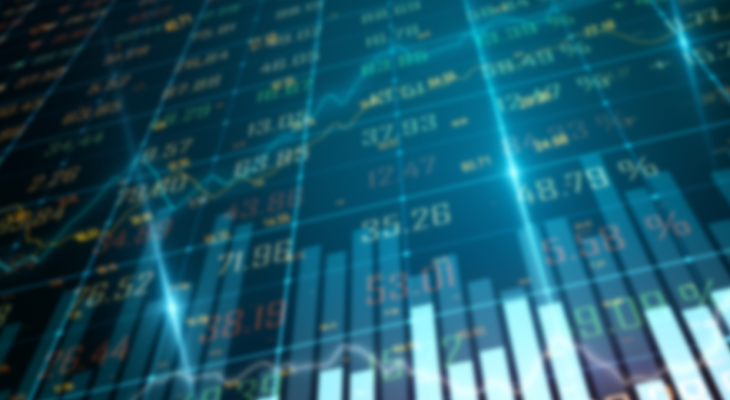 Six dividend-paying semiconductor investments to purchase while they are trading at discounts compared to slower-growing industrial stocks have been recommended by BoA Global Research.

S&P 500 semiconductor investments trade at an average of 19x 2022 price-to-earnings (P/E) estimates, nearly 20% below the S&P 500 Industrials, despite free cash flow (FCF) margins 1,500-2,000 basis points (bps) above and 400-500 bp faster sales growth than the industrials, according to a May 11 BoA Global Research note. The six dividend-paying semiconductor investments to purchase share attributes with high-quality industrial stocks, with the current relative weakness in the semiconductor sector shown by the SOX index vs. industrials (XLI) differential that signals market rotation rather than trading based on fundamentals, BoA reported.

Similar to industrials, semiconductor stocks and funds benefit from U.S. infrastructure stimulus in 5G, broadband and domestic chip manufacturing. Even though double-ordering risks exist in semiconductor stocks, they are offset by “solid visibility” that is driven by non-cancellable orders, product customization and broad-based demand, according to BoA.

Plus, the recent upside in gross margins indicates that semiconductor companies are “very effective” in passing along rising input costs to turn inflation into a positive driver for the sector, BoA noted. As a result, the SOX index historically has ascended amid rising rates.

“Over the past five years, chip stocks have been among the best-performing NASDAQ stocks, with the Philadelphia Semiconductor Index (SOXX) up 4X, while the NASDAQ 100 (QQQ) is up 3X,” said Hilary Kramer, who hosts the nationally aired “Millionaire Maker” radio program and leads the GameChangers and Value Authority advisory services.

Value investments had been trouncing growth stocks heading into trading on May 11, with the Russell 3000 Value Index up 19.1% in 2021, compared to a gain of 4.3% for the Russell 3000 Growth Index. Kramer wrote to her Value Authority subscribers that she expects value stocks to keep outperforming growth stocks, but added “a rest” would be overdue and healthy for the market.

The six dividend-paying semiconductor investments to purchase are trading at more than 20X earnings estimates, suggesting the market growth will last beyond 2022, Kramer commented. But it is interesting to note that even with the recent chip shortage, semiconductor stocks have not performed well since early April.

Overall, risk-reward characteristics of the semiconductor stocks are “not great,” but can describe the NASDAQ as well, Kramer counseled. End markets and earnings should be healthy if the economy remains firm, she added. 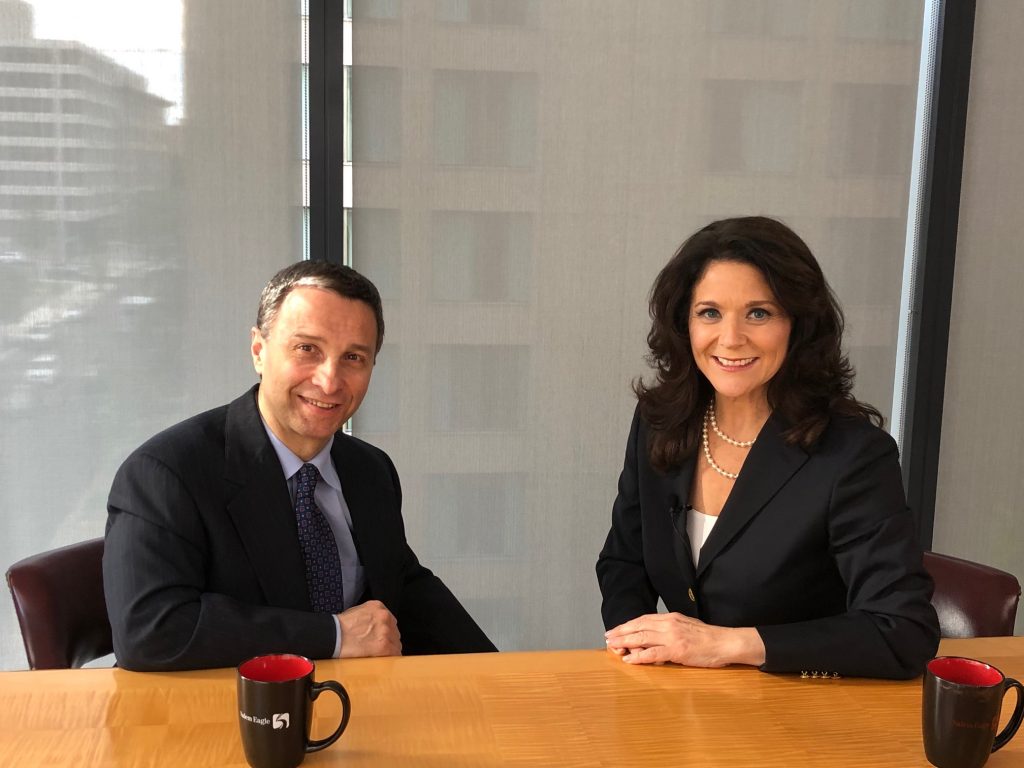 The top recommendation of BoA among the six dividend-paying semiconductor investments to purchase is Applied Materials, Inc. (NASDAQ: AMAT), a Santa Clara, California-based provider of materials engineering for computer chips and advanced displays. BoA’s price objective of $170 for AMAT is based on 25x 2022 estimated earnings per share (EPS), above the high end of a historical range of 8x-23x, but in line with the 1x-2x historical discount to more profitable peers. 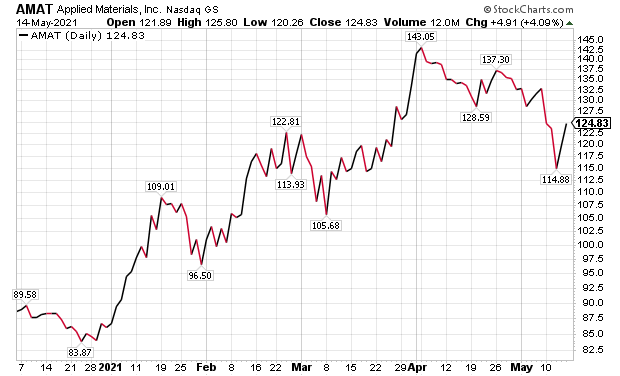 BoA assigned Lam Research a $725 price target, based on 20x cash adjusted 2022 estimated P/E, within the stock’s historical range of 8x-24x and based on LRCX’s 20%-plus EPS growth rate. Amid a multi-year wafer fabrication equipment growth cycle, LRCX is well positioned to benefit, the investment firm wrote. 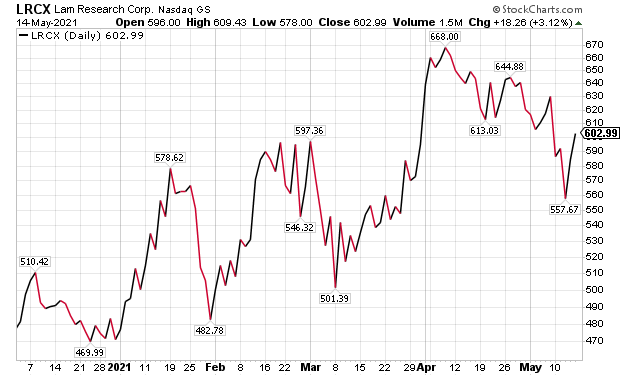 Risks to BoA’s price objective for KLAC are the cyclical nature of semiconductor capital spending and its impact on earnings, as well as price and market share competition, particularly against Applied Materials. Another vulnerability would occur if problems arose in bringing new products and technologies to market, BoA cautioned. 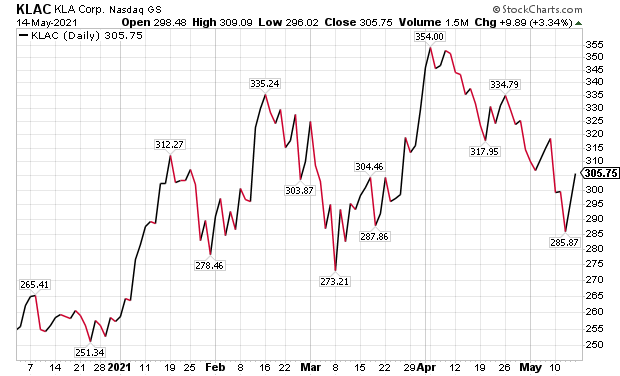 Another of the six dividend-paying semiconductor investments to purchase is Teradyne, Inc. (NASDAQ:TER), a North Reading, Massachusetts-based maker of automatic test equipment. BoA’s $155 price objective on TER is based on 25x P/E, applied to a fiscal year 2022 estimated Non-GAAP EPS.

The expected P/E is at the high end of Teradyne’s long-term trading range of 12x-26x, given TER’s recent and unique exposure to 5G/automation, cyclical recovery in auto and industrial markets and market share gains in core semiconductor testing. Downside risks to BoA’s price objective are cyclicality and potential loss of market share in the core semiconductor test market, along with mounting competition in the robotics segment, BoA cautioned. 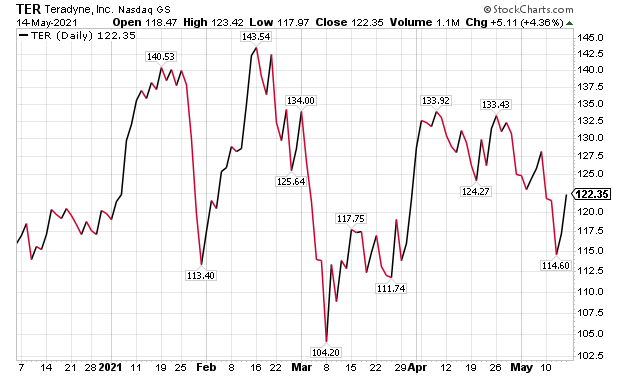 “The semiconductor industry is going through major changes that are related more to politics and national security than technology,” said Bob Carlson, chairman of the Board of Trustees of Virginia’s Fairfax County Employees’ Retirement System with more than $4 billion in assets. “Asian companies have dominated the industry for a while. But the United States is concerned about national security, competition with China and supply chain problems. A heavy dependence on Asian semiconductor manufacturers presents the potential for geopolitical tensions to trigger restrictions on semiconductor supply.”

The semiconductor stocks have slid from their highs due to such concerns, coupled with revenue and earnings declines that are likely to be caused by the global semiconductor shortage, said Carlson, who also heads the Retirement Watch investment newsletter. Now is a good time to invest in the stocks, particularly with a diversified portfolio through an exchange-traded fund (ETF), such as Invesco Dynamic Semiconductors ETF (NYSE Arca:PSI), Carlson added. 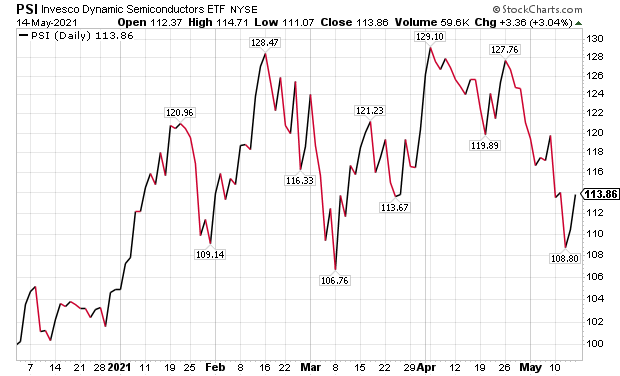 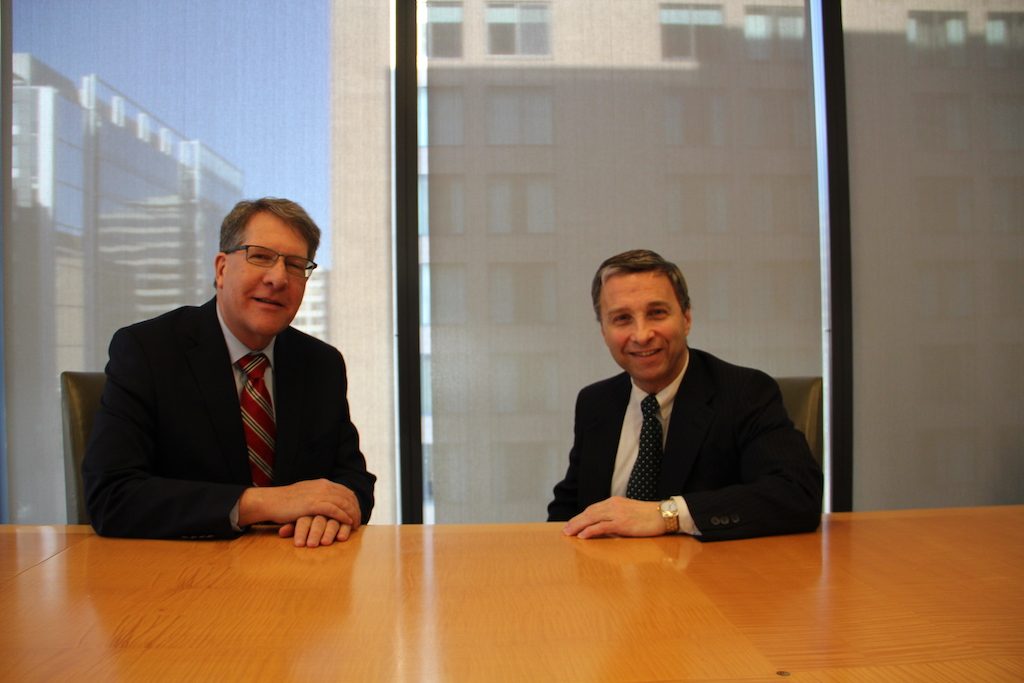 A low-dividend-paying BoA buy recommendation, NVIDIA Corporation (NASDAQ:NVDA), is a Santa Clara, California-based designer of graphics processing units for the gaming and professional markets, as well as chip units for the mobile computing and automotive markets. BoA highlighted trends among cloud companies and noted NVDA showed solid data center visibility at its recent analyst day, with 2021 forecast to be a strong year with year-to-year growth of about 30%.

In addition, BoA described NVDA as having momentum that could accelerate after its introduction of its Grace-Arm-based server processor in 2023 to focus on the Giant AI/HPC portion of the market. NVDA is poised to take advantage of its scale, data center presence and complementary silicon (GPU and DPU), as well as its software and development ecosystem, BoA added. 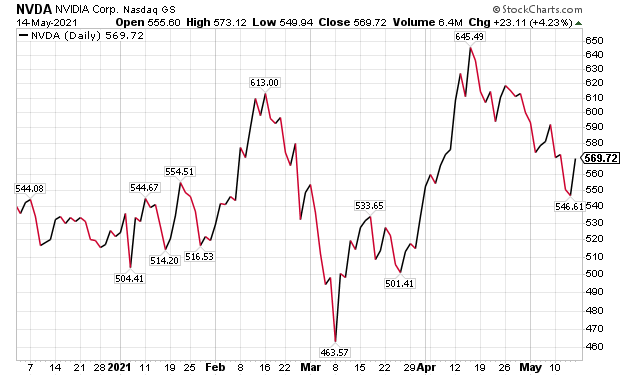 Nova Measuring Instruments (NASDAQ:NVMI), a non-dividend-paying, Rehovot, Israel-based provider of metrology devices for advanced process control in semiconductor manufacturing, gained a $108 price objective from BoA, based on 34x  2022 estimated non-GAAP EPS that includes stock compensation and adjustments for net cash. The valuation is within its peer range of 20x-40x and is justified, BoA noted, due to Nova’s superior gross margin profile and its potential to outgrow the market in the next three years.

Downside risks for NVMI could include an inability to earn share in the new X-Ray metrology market, stiff competition from large rivals such as KLA Corp. and historically cyclical semiconductor capital spending, according to BoA. Nonetheless, the investment firm lists NVMI among six dividend-paying semiconductor investments to purchase. 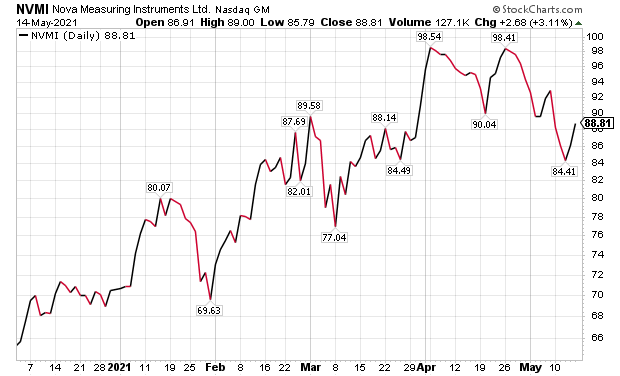 COVID-19 vaccination progress in recent weeks offers optimism that new cases and deaths due to the virus will keep slowing. Additional hope comes from the Food and Drug Administration (FDA) approving a third COVID-19 vaccine to be put to use.