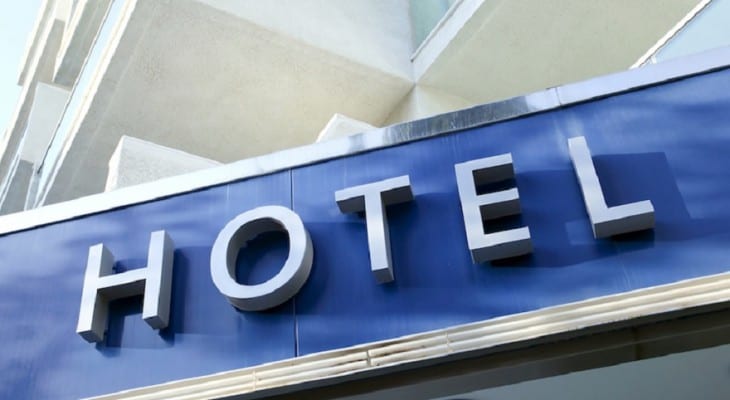 Three dividend-paying hotel stocks to buy offer growth and income amid strong consumer demand and limited exposure to the effects of Russia’s ongoing invasion of Ukraine.

The three dividend-paying hotel stocks to buy received recommendations from BofA Global Research and seem poised to rise from their current reduced valuations. With both leisure and resort demand ranging between strong and stable, the outlook seems bright, despite recent threats from Russia’s President Vladimir Putin to wage a lengthy war in Ukraine and the Fed’s plan to keep raising interest rates in 2023 to curb inflation by slowing both economic and employment growth.

While leaders of hotel companies are conscious of the toughening macro backdrop, none have seen any material sign of slowing demand, according to BofA. Executives of most hotel companies pointed to sustained leisure demand, the return of group business and improvements in transient business activity boosting third-quarter results. Bookings, leads and meeting planner activity all remain healthy, BofA wrote in a recent research note. 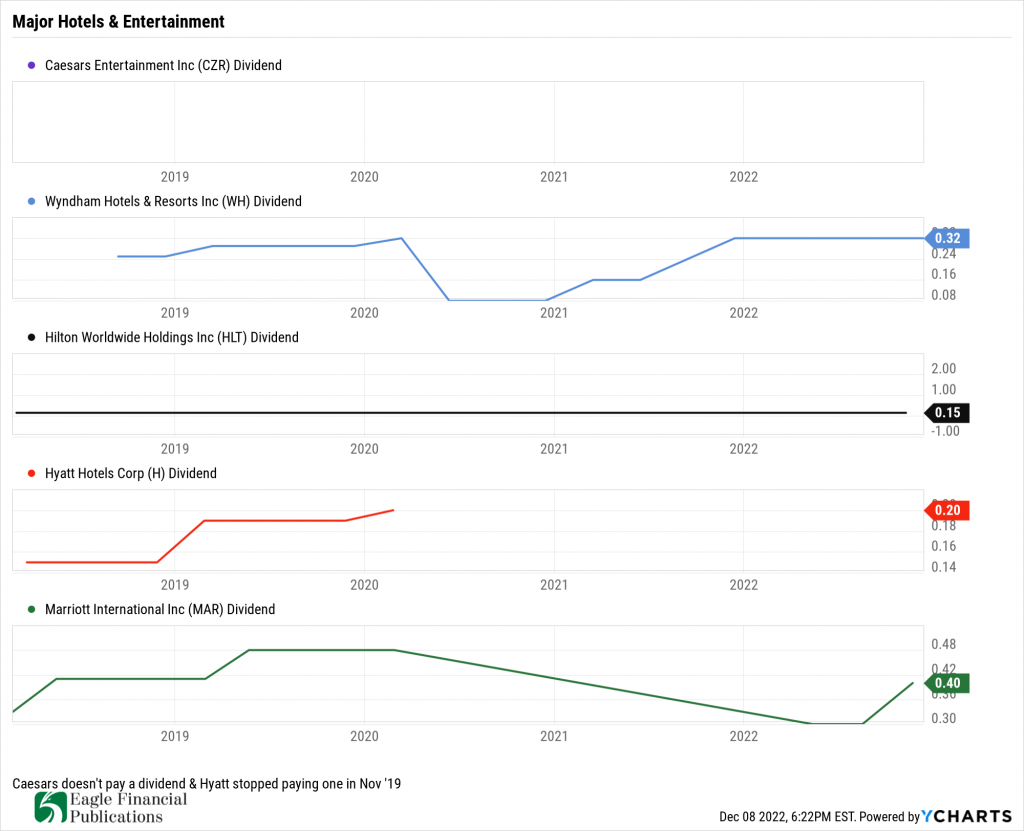 “Most companies expect Q4 demand to look similar to Q3, and noted healthy trends through October,” according to BofA. “Several called out accelerating occupancy in October relative to September/Q3. The average 4Q outlook — for those providing it — is +2.9% ahead of 2019.”

The Five Star Trader advisory service, led by free-market economist Mark Skousen, PhD, reported on Dec. 6 that the gross output (GO) statistic he uses to measure total economic spending is proving to be more accurate than gross domestic product (GDP) in assessing the economy’s strength. While real GDP, factoring in inflation, fell in the first two quarters of 2022, real GO kept climbing, indicating that there was no recession, Skousen wrote.

The value of the supply chain continues to boom, despite shortages, Skousen wrote to his subscribers. Although Skousen is not recommending a hotel stock right now, he has done so previously and may again in the months ahead. However, job creation is growing, and unemployment is still under 4%, as labor shortages remain, price inflation continues at the retail level and the U.S. government runs massive deficits, he added.

More than 70 million Social Security recipients will receive an 8.7% increase in payments starting this month, so inflation is not going away, projected Skousen, who also leads the Forecasts & Strategies investment newsletter.

“Wall Street is fearful that continued real growth means that the Federal Reserve will push for higher interest rates, and that’s why stocks have sold off over the past few days,” Skousen apprised subscribers of his Five Star Trader service that recommends both stocks and options. “The danger is always that the Fed overreacts, as it has done in the past, raising interest rates too high.” 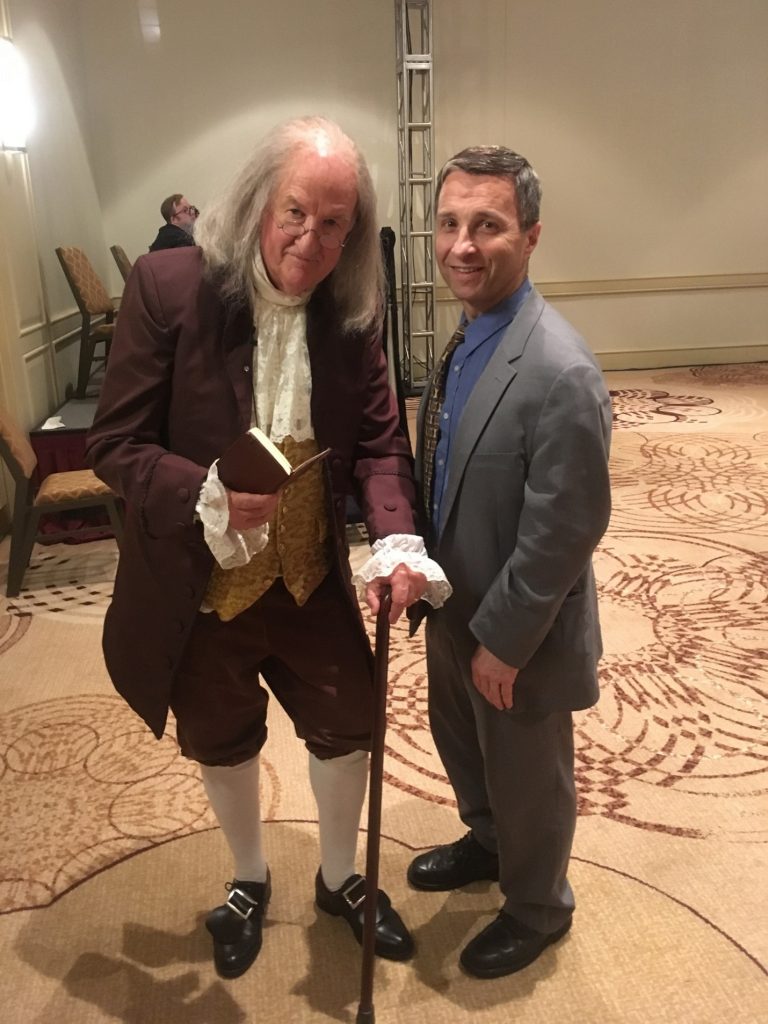 The three dividend-paying stocks to buy feature prominent names in the lodging industry and could benefit from exposure to certain markets outside the United States that appear to have an improving outlook. Internationally, Europe has performed much better than expected in the third quarter, while China could offer an opportunity in 2023, despite volatility partially caused by its zero-COVID policy and periodic strict lockdowns that have led to public protests, according to BofA.

Hilton Worldwide (NYSE: HLT), of McLean, Virginia, obtained a $160 price objective from BofA, based on a premium to historical multiples for this type of hotel business due to improving share gains and a leaner and more efficient business model. The lodging company is expected to sustain historically high earnings before interest, taxes, depreciation and amortization (EBITDA), BofA added. The price objective further is in line with a midcycle multiple on recovery earnings discounted back to 2022 estimates, according to BofA.

Risks to reaching the price objective include greater-than-expected economic weakness, leading to declines in travel demand, greater-than-expected delays in hotel development — possibly slowing system growth, worse-than-expected consumer spending to cause a possible dip in demand for timeshares and any acts or threats of terrorism, BofA cautioned. 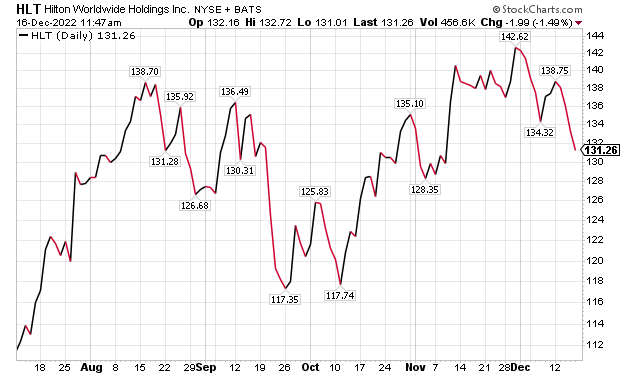 Bethesda, Maryland-based Marriott International (NASDAQ: MAR) is a premier global hotel company, said Bob Carlson, a pension fund chairman who also heads the Retirement Watch investment newsletter. The hotel chain, located in a neighboring suburb to where I live in Maryland, operates brands across all income levels and through its hotels around the world.

Marriott also pioneered the model of owning few hotels, Carlson recalled. Instead, the company earns fees for franchising its brands and managing hotels under contract to property owners. The company has one of the top loyalty programs in the industry, giving it an advantage with travelers and hotel owners looking for partners, he added.

Since the company owns little real estate and has low debt, Marriott is something of a “pure play on growth in travel,” Carlson counseled. Its fees rise quickly as occupancy increases but can slide fast in a downturn, he continued.

Marriott is a “solid long-term” investment on travel and is likely to increase market share around the globe, Carlson told me. 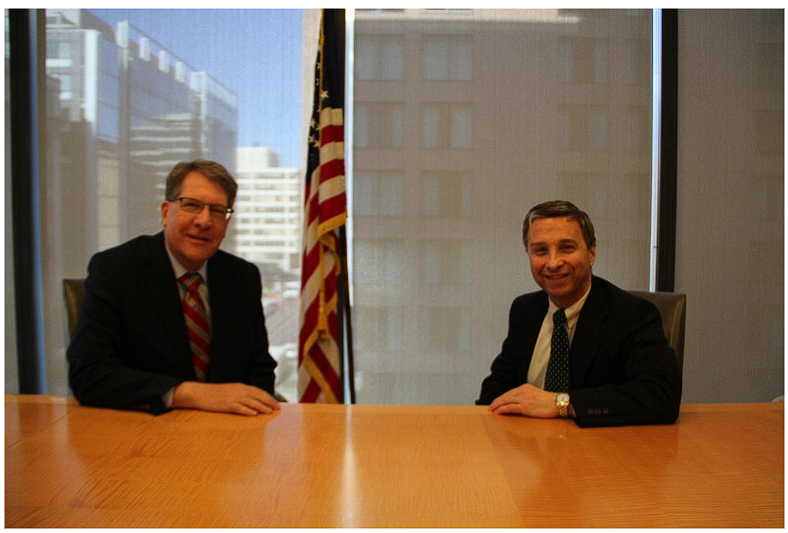 BoA set a $190 price objective on Marriott, based on approximately 16x its 2023 estimated earnings before interest, taxes, depreciation and amortization (EBITDA), showing a premium to historical multiples for this type of hotel business but in line with the group due to depressed interest rates. The price objective is also in line with a midcycle multiple on recovery earnings discounted back to 2022 estimates. 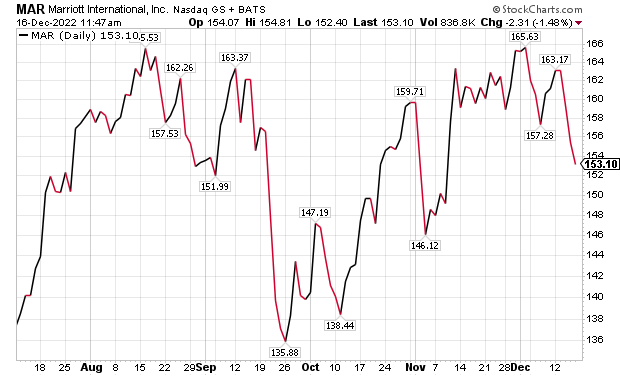 Wyndham Hotels & Resorts, Inc. (NYSE: WH), of Parsippany, New Jersey, gained a $85 price objective from BofA, showing a discount to the valuation of its peers such as Hilton, Marriott and Rockville, Maryland-based Choice Hotels International (NYSE: CHH), while in line with the long-term average of asset-light lodging C-corps. BofA wrote that the multiple is warranted given Wyndham’s competitive advantage in scale and stability in earnings from its pure franchised business.

“We think the market is discounting WH to factor in a historically significant amount of deletions every year, offset by a business that’s almost entirely fee-based,” BofA wrote. “The price objective is also in line with a midcycle multiple on recovery earnings discounted back to 2022E.”

Risks to achieving the BofA price target include high financial and operating leverage used to fund the 2020 combination of Caesars Entertainment, Inc. and Eldorado Resorts, Inc. to form the largest gaming company in the United States. Additional risk stems from whether a cost reduction model can work in a market as competitive as Las Vegas, BofA wrote. Prolonged industry headwinds related to COVID-19 could further exacerbate these factors. 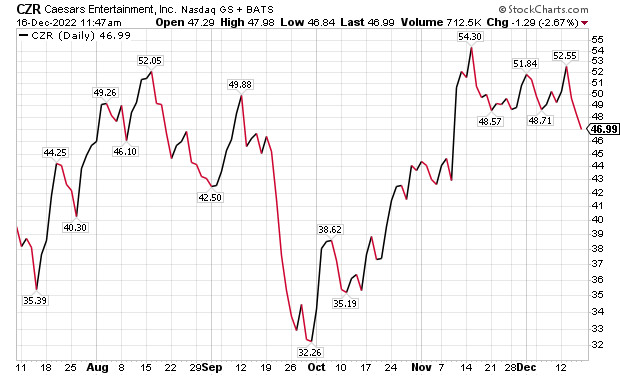 Chicago-based Hyatt Hotels (NYSE: H) does not pay a dividend either but received a $110 price objective from BofA, based on a valuation below more “asset-light peers” such as Hilton. BofA views Hyatt as a way to chase a recovery in the hotel business cycle and to tap exposure to fee-based revenue, strong net unit growth (NUG), recovery potential and operating leverage through group and corporate-owned-hotel exposure, incentive management fee recovery and valuation multiple expansion

BofA’s price target could be exceeded due to possible catalysts that include Hyatt’s asset sales exceeding expectations, acquisition of Apple Leisure Group giving additional upside, pent-up demand coming back stronger than expected in second-half 2022 and net unit growth continuing to outperform lodging peers. Key risks to the price goal are maintaining significant exposure to China, which may face headwinds to COVID policies, COVID cases pushing the return to offices further out and acting as a headwind to corporate travel and heavy exposure to the luxury segment, which has lagged the rest of the industry, BofA wrote. 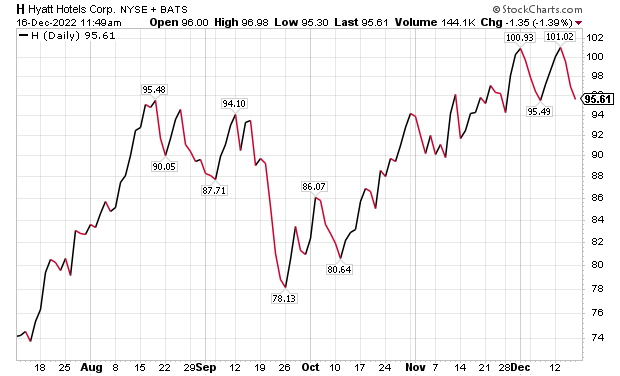 As of now, 70% of Hyatt global portfolio is in the luxury and upscale hospitality segment. This bodes well, since the luxury consumer has not pulled back on travel spending, Connell said.

Business travel is starting to recover from the pandemic, with 2022 about even to Hyatt’s pre-pandemic and a strong 2023 outlook, Connell continued. Group booking revenue for the third quarter of 2022 ended just 3% below 2019 levels.

Group travel bookings and reservations for the third quarter of 2023 are 30% ahead of 2019 levels, Connell told me. Asia, including China, has been strong for Hyatt and future prospects look even better, she added.

As of the second quarter of 2022, Hyatt’s revenue per room in China was 15 points higher than in 2019, Connell advised. China is 10% of the company’s revenue and 5% of its profits, she added.

“Due to the region’s strength, Hyatt it is in the process of continuing to build out its luxury brand presence in Asia, excluding China,” Connell said. Plus, Hyatt has a solid cash balance of almost $3 billion. Cash is spent on stock repurchases and debt reduction, added Connell, who estimates Hyatt’s share price could jump 15-20% in 2023. 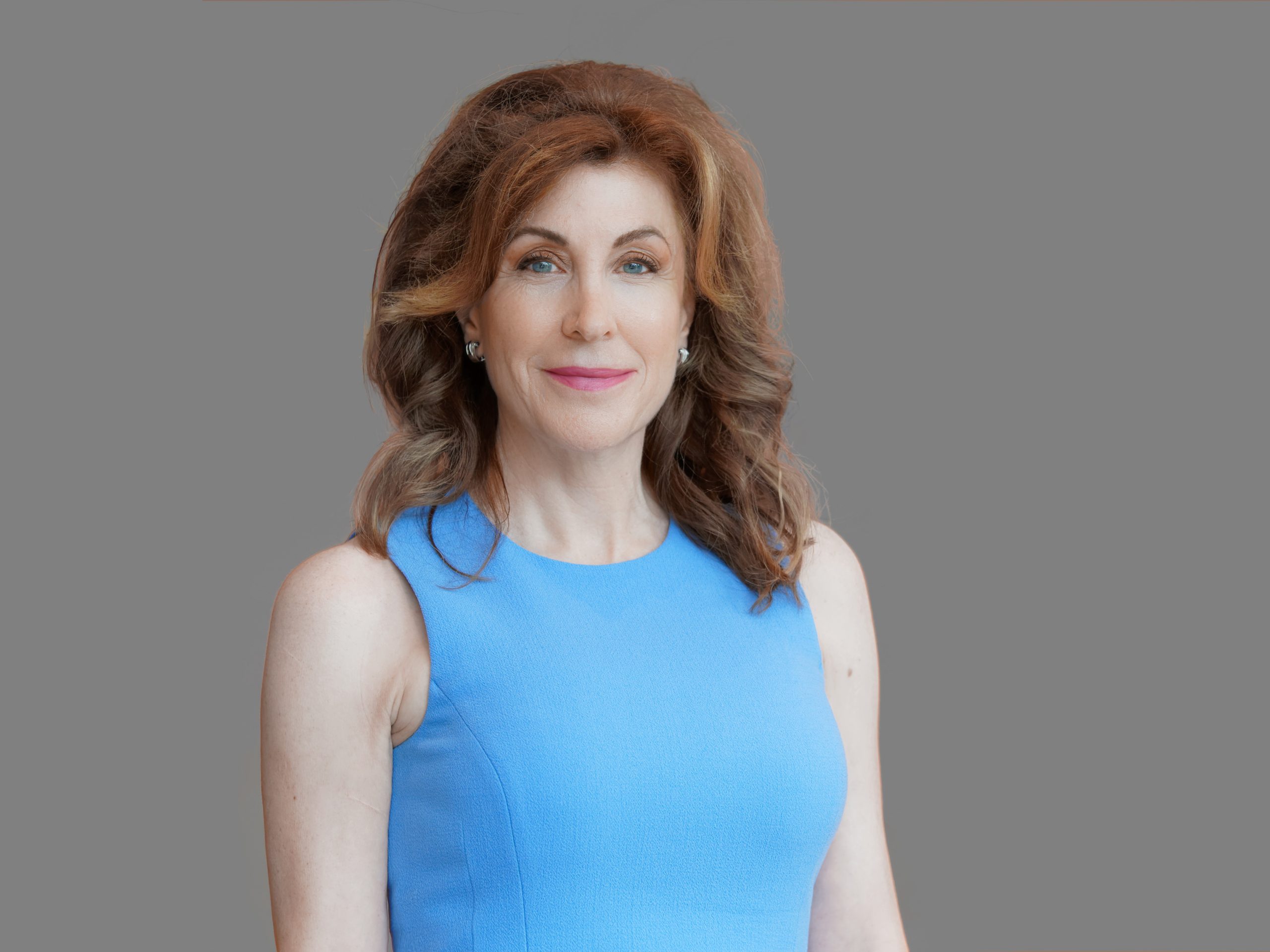 The U.S. Center for Disease Control and Prevention recommended wearing masks to prevent the spread of COVID-19, a nasty strain of the flu and serious respiratory virus. CDC Director Dr. Rochelle Walensky said doing so would cut the chance of catching or spreading such viruses.

Indeed, flu and respiratory syncytial virus are spreading at high levels in the United States at the same time COVID is picking up, straining hospital emergency departments. Walensky urged everyone who is eligible to receive a bivalent booster and a flu shot.

China’s economy experienced COVID-19-related weakening due to lockdowns that curbed exports and imports more sharply than expected in November. Weak global and domestic demand, public protests about the county’s zero-COVID policy and a real estate slump are hurting the world’s second-biggest economy.

China’s police patrolled streets, checked cell phones and called some demonstrators to warn them against continuing their civil unrest. That response reduced protests about the country’s zero-COVID policy that is slowing economic growth and led many people to oppose the controversial lockdown policy of China’s leader Xi Jinping. China’s authorities may be starting to pay attention to the concerns of its citizens by slightly easing the current draconian lockdowns that are bogging down supply chains.

None of the three dividend-paying hotel stocks to buy have much exposure to fallout from Russia’s invasion of neighboring Ukraine on Feb. 24 and the persistent shelling and missile attacks occurring since then. Even though Russia’s leaders call that assault on Ukraine a “special military operation,” the three dividend-paying hotel stocks to buy largely seem protected by focusing on serving patrons who have money to spend on travel and are not directly affected by the deaths of an estimated 100,000 on both sides of the continuing conflict that shows no signs of ending soon.

Paul Dykewicz, www.pauldykewicz.com, is an accomplished, award-winning journalist who has written for Dow Jones, the Wall Street Journal, Investor’s Business Daily, USA Today, the Journal of Commerce, Seeking Alpha, Guru Focus and other publications and websites. Paul, who can be followed on Twitter @PaulDykewicz, is the editor of StockInvestor.com and DividendInvestor.com, a writer for both websites and a columnist. He further is editorial director of Eagle Financial Publications in Washington, D.C., where he edits monthly investment newsletters, time-sensitive trading alerts, free e-letters and other investment reports. Paul previously served as business editor of Baltimore’s Daily Record newspaper. Special Holiday Offer: Paul is the author of an inspirational book, “Holy Smokes! Golden Guidance from Notre Dame’s Championship Chaplain,” with a foreword by former national championship-winning football coach Lou Holtz. The book is great holiday gift and is endorsed by Joe Montana, Joe Theismann, Ara Parseghian, “Rocket” Ismail, Reggie Brooks, Dick Vitale and many others. Call 202-677-4457 for special pricing on multiple-book purchases.