Three Innovative Dividend-paying Investments to Purchase For Income and Growth 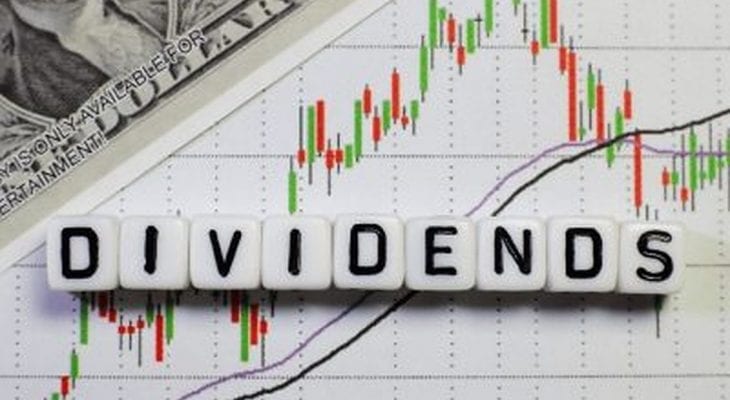 Among the three innovative dividend-paying investments to purchase are the world’s largest lithium miner and two funds. Investors who are not wedded to the idea of receiving a dividend can seek capital appreciation from four other stocks that feature a developer of a pharmaceutical to treat people suffering from post-traumatic stress disorder (PTSD), a cryptocurrency brokerage firm and two cancer treatment providers.

The seven innovative investments were mentioned as recommendations by three seasoned market followers who shared their favorites during the recent Global Financial Summit held as part of the FreedomFest conference in Rapid City, South Dakota. This year’s conference drew a record 2,700-plus attendees and featured a number of investment-savvy speakers who shared their latest ideas.

As always, investors should remember that innovative stocks may offer outsized growth but their share prices can be volatile. Such investments are best suited for those who can afford to weather the ups and downs that come with such holdings.

Dividend-paying Albemarle (NYSE:ALB) is the world’s largest miner of lithium, which serves as the main ingredient in batteries used by electric vehicles (EVs). As I have written in past columns, electric vehicle manufacturers such as Palo Alto, California-based Tesla (NASDAQ:TSLA), Detroit-based General Motors (NYSE:GM), Dearborn, Michigan-based Ford (NYSE:F) and Volkswagen AG (FRA:VOW), of Wolfsburg, Germany, seem destined to remain major competitors in the future of transportation.

Those electric vehicle manufacturers and others worldwide, including Nissan (OTC:NSANY), Mitsubishi (OTC:MMTOF) and Toyota (NYSE:TM) in Japan, as well as Li Auto (NYSE:LI) in China, have combined to announce spending programs that top $200 billion to design and build the cars and trucks of tomorrow. The ultimate funding should surpass that amount. 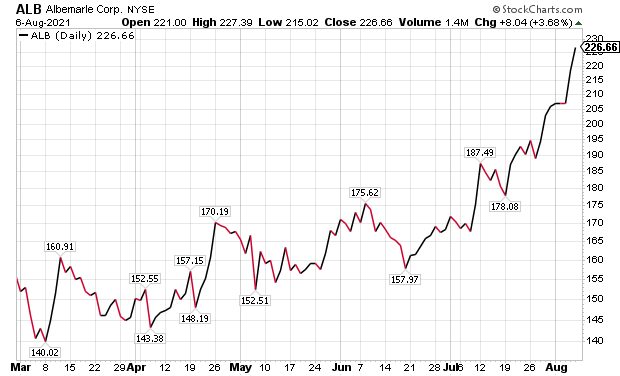 Jim Woods, editor of the Successful Investing and Intelligence Report investment newsletters, as well as leader of the Bullseye Stock Trader advisory service and co-head of the Fast Money Alert service with Mark Skousen, PhD, has recommended Tesla profitably in the past. Despite occasional pullbacks, electric vehicle stocks have been trending upward as sales and production of such products have jumped in recent years. 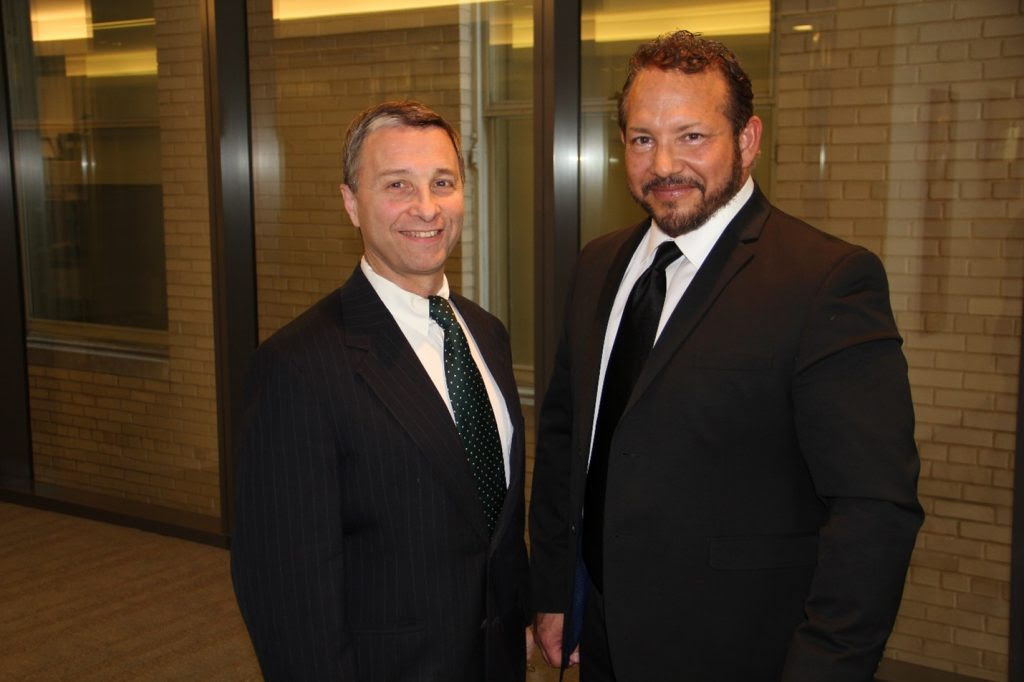 The FreedomFest organizer, Mark Skousen, PhD, told attendees about two dividend-paying growth funds that he recommends. Both have done well.

One is the Technology Select Sector SPDR Fund (XLK), featuring some of the best-growing innovative stocks available. The fund is up nearly 100% since Skousen recommended it in September 2019 through his Forecasts & Strategies investment newsletter.

Skousen, who further leads the Home Run Trader, Five Star Trader, TNT Trader trading services, also told attendees about the broad-based SPDR S&P 500 ETF Trust (SPY). That fund has jumped more than 23.6% since he recommended it to his subscribers late in 2020. 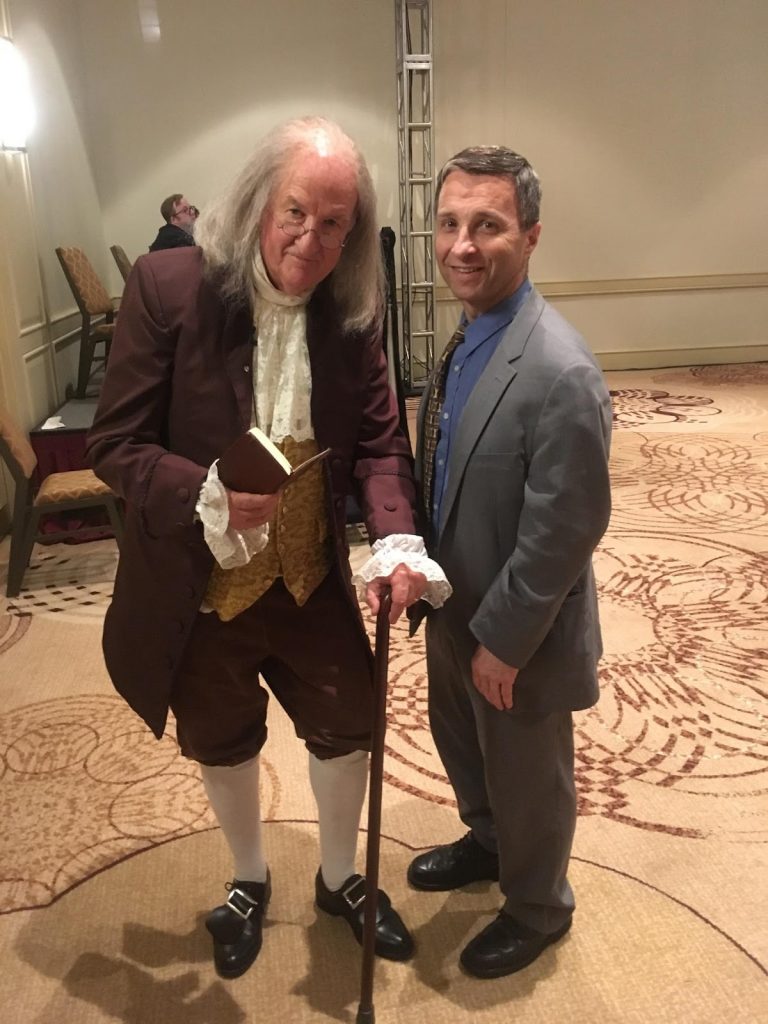 Cybin Is a Non-Dividend-paying Innovative Stock to Buy

Cybin Inc. (OTCMKTS:CLXPF) is a medical psilocybin molecule maker that is developing a pharmaceutical for veterans who suffer from post-traumatic stress disorder (PTSD), as well as for those who need to cope with anxiety, depression and addiction. The stock began trading publicly in November 2020 and has been on the ascent.

The prospective market for Cybin pharmaceuticals is huge, with an estimated 700 million people globally afflicted by mental illness, an eating disorder or an addiction. Cybin announced it has received approval for the listing of its common shares on the NYSE American LLC stock exchange and its common shares begin trading on or about August 5, 2021, under the symbol “CYBN.” Woods indicated Cybin’s listing on the NYSE could help the stock to enlarge its following from investors.

“As the first psychedelic biotech company that will now trade on this esteemed exchange in the U.S., we will commit resources to reach the broadest investor audience with our mission and will continue to accelerate our efforts to position Cybin as a leader in the sector,” said Doug Drysdale, Cybin’s CEO.

Voyager Digital (OTCMKTS:VYGVF) is a cryptocurrency brokerage firm that lets customers buy and sell Bitcoin, Ethereum, Dogecoin, etc. I purchased shares of the stock earlier this year in hopes of profiting from increased investor interest in such investments without needing to choose the long-term victors in a wide field of cryptocurrency competitors.

However, the stock generally trades in the same direction as Bitcoin, so Voyager Digital has dipped along with the cryptocurrency recently, Woods said. However, Voyager Digital could become a big winner, despite its volatility, Woods told me. For the past three years, VYGVF is up 13,480%. 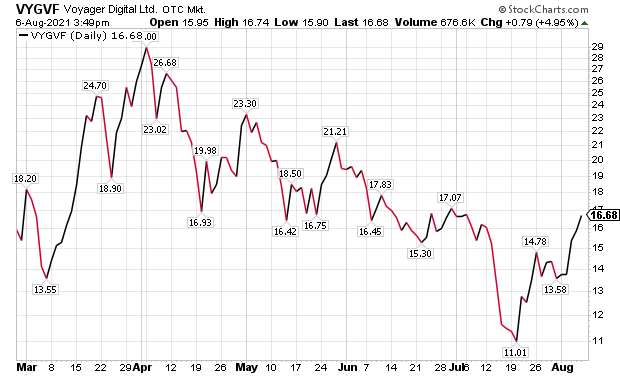 Investors who want to profit from growth companies that will benefit from innovations, but face less volatility than individual stocks, should consider a fund such as Touchstone Sands Capital Select Growth (PTSGX) that offers a diversified portfolio, said Bob Carlson, who also serves as chairman of the Board of Trustees of Virginia’s Fairfax County Employees’ Retirement System with more than $4 billion in assets. The fund has several classes of shares but is the best one for most individual investors, said Carlson, who also heads the Retirement Watch investment newsletter. 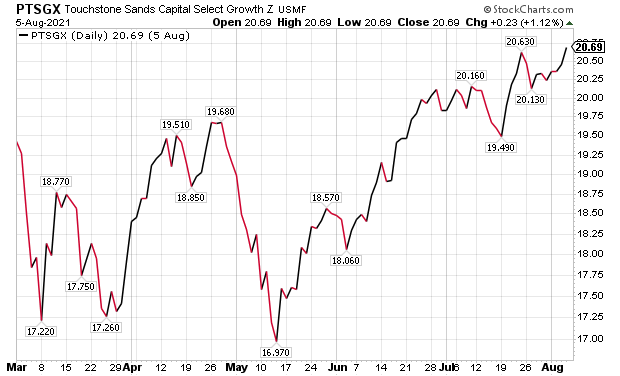 “The fund focuses on a small number of growth companies that the fund managers have studied closely and in which they have great confidence,” Carlson said. “Recently, the fund held only 30 stocks and had 58% of the fund invested in the 10 largest positions.”

It also has an annualized return of 29.07% over three years, 27.06% over five years and 18.61% for the last 10 years. As with most growth funds, it does extremely well when stocks are rising but lags when equities are flat or falling, Carlson counseled.

Alex Green, a New York Times bestselling author who has more than 20 years of experience as a Wall Street veteran involved in research and investment advising, spoke at FreedomFest about two anticancer stocks that he is recommending. As a former health communications intern at the National Cancer Institute when I was in graduate school, I am interested in such stocks not just as investments but as potential treatments for those who desperately need them.

Cancer is second only to heart disease as the top cause of death in the United States. The cold reality is that cancer averages more than 18 million new cases worldwide each year, as well as 1.8 million in just the United States.

The National Cancer Institute estimates that the number of new cases per year will climb to 29.5 million by 2040. With annual spending on battling cancer exceeding $150 billion in the United States, investors should keep in mind that cases are projected to rise amid an aging population in America.

Annual expenditures for cancer in the United States currently top $150 billion. One of the unfortunate aspects of cancer is that many patients do not feel symptoms that lead them to see a doctor until the disease may be in a late stage and metastatic, Green said.

In addition, Green voiced hope that a simple blood test could diagnose cancer early before it has a chance to spread. Such as diagnostic advance would avoid suffering by patients, as well as create a financial windfall for those who develop and provide it, he added.

Non-dividend-paying Exact Sciences (Nasdaq: EXAS) aims to offer a diagnostic breakthrough and the Madison, Wisconsin-based company garnered Green’s recommendation. He is bullish on the company’s prospects for providing cancer screening and diagnostic tests in the United States and elsewhere. 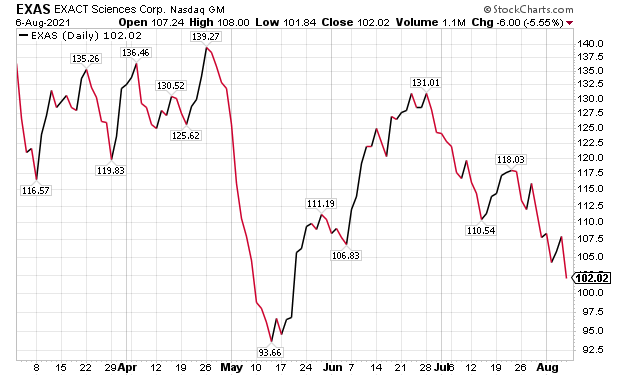 Its management is seeking for the company’s DNA screening technology to detect all types of cancer and do so earlier than in the past. Its CEO Kevin Conroy recently said the diagnostic advance is “very close.”

If achieved, Green said it could have a greater effect on human health than any diagnostic ever devised.

Israel-based Novocure (Nasdaq: NVCR) offers a novel therapy for treating solid tumor cancers and jumped more than 162 points, or 274%, from the end of June 2020 to June 2021. It still is recommended by Green, even though the stock stumbled recently after its Phase 2 trial results to treat advanced liver cancer patients.

Green described the steep slide as an “overreaction” and called it a new buying opportunity for investors who do not need a dividend payout. The stock reached $225.58 just six weeks ago on June 23 before closing at $150.05 on Aug. 6 for a 33.5% drop. 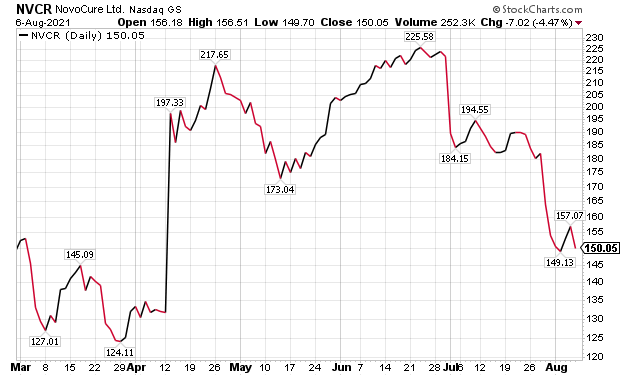 Green called the company an “international oncology leader.” He cited its operations in the United States, Europe and Asia that produce more than $500 million in annual sales.

A notable achievement for Novocure came in 2011 when it launched Optune, its TTFields delivery system, for glioblastoma, a common primary brain cancer and one of the most difficult types to treat. With Food and Drug Administration (FDA) approval obtained in 2015, Optune uses low-intensity electric fields to treat both glioblastoma and mesothelioma, a tumor of the tissue that lines the heart, lungs, stomach and other organs.

Studies are ongoing to use the treatment for other brain cancers, as well as for pancreatic, ovarian, liver and lung cancers. Results are due in just months.

Unlike pharmaceutical products that may work only in certain subsets of patients, Novocure’s technology is showing effectiveness across the board, Green said. Plus, there are no toxic side effects, he added.

The increasingly transmissible Delta variant of COVID-19 is causing a new surge in cases and raising serious warnings from health experts. The variant is blamed directly for rapidly rising case numbers and deaths across the United States. Genetic variants of SARS-CoV-2 have been emerging and circulating globally during the pandemic, but the Delta variant seems to be especially dangerous, according to the Centers for Disease Control and Prevention (CDC).

A variant has one or more mutations that differentiate it from other COVID-19 varieties in circulation. The Delta variant is turning into the dominant coronavirus strain in the United States, according to the CDC. With about half the U.S. population not fully vaccinated, public health officials caution that a further rise in COVID-19 cases may occur this fall when unvaccinated children return to school.

The Food and Drug Administration recently approved a third COVID-19 vaccine, manufactured by Johnson & Johnson (NYSE:JNJ), which requires just one dose rather than two, as is required with the first two vaccine providers: Pfizer (NYSE:PFE) and Moderna (NASDAQ:MRNA).

The three innovative dividend-paying stocks to purchase are recommended as ways to profit amid the pandemic. Rising COVID-19 cases and deaths add risk to any stock purchases but improving economic data and a recent $1.9 trillion federal stimulus package should help to lift the prices of innovative stocks that show strong promise.

Paul Dykewicz, www.pauldykewicz.com, is an accomplished, award-winning journalist who has written for Dow Jones, the Wall Street Journal, Investor’s Business Daily, USA Today, the Journal of Commerce, Seeking Alpha, GuruFocus and other publications and websites. Paul, who can be followed on Twitter @PaulDykewicz, is the editor of  StockInvestor.com and DividendInvestor.com,  a writer for both websites and a columnist. He further is editorial director of Eagle Financial Publications in Washington, D.C., where he edits monthly investment newsletters, time-sensitive trading alerts, free e-letters and other investment reports. Paul previously served as business editor of Baltimore’s Daily Record newspaper. Paul also is the author of an inspirational book, “Holy Smokes! Golden Guidance from Notre Dame’s Championship Chaplain,” with a foreword by former national championship-winning football coach Lou Holtz. The book is great as a gift and is endorsed by Joe Montana, Joe Theismann, Ara Parseghian, “Rocket” Ismail, Reggie Brooks, Dick Vitale and many others. Call 202-677-4457 for special pricing!