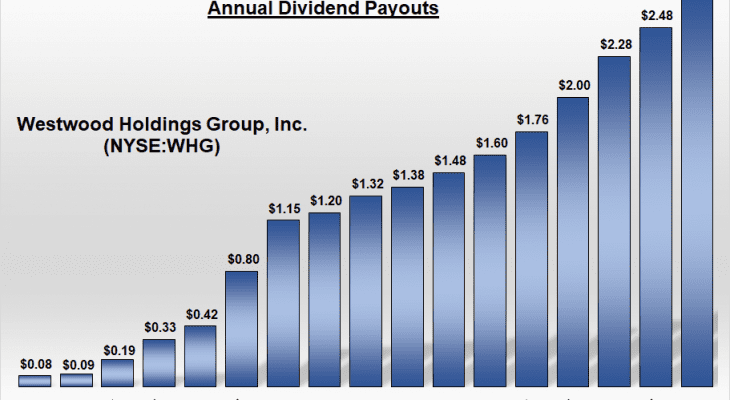 Westwood Holdings Group, Inc. (NYSE:WHG) has been boosting its annual dividend every year since it started paying dividends in 2002 and currently offers its shareholders a 4.7% yield.

Following the recent pullback of the entire market, the share price dropped slightly below its level from one year ago. However, at the end of January, the share price was trending 17% higher. Even at the higher share price, the forward dividend yield was still 3.9%.

The company’s next dividend date will occur on March 8, 2018, and the pay date follows a little more than four weeks later, on April 2, 2018.

The company’s current $0.68 quarterly payout is 9.7% higher than it was in the same period last year. This current quarterly distribution converts to a $2.72 annualized payout and currently yields 4.7%, which is more than 26% above the company’s own five-year average yield of 3.7%. The yield spiked because of the company’s share price drop since late January 2018 with the rest of the financial markets. However, even a 3.8% yield calculated using the 52-week share price of $70.84 from October 20, 2017, is 3.8% higher than the 3.7% average over the past five years.

As already indicated, the share price showed a steady growth over most of the trailing 12-month period except the beginning and the end. The share price dropped 13.6% at the onset of the trailing 12-month period to reach its 52-week low of $51.60 on March 29, 2017. After bottoming out at the end of March, the share price ascended more than 37% before peaking at its 52-week high of $70.84 on October 20, 2017. Following the October peak, the share price pulled back slightly and traded mostly in the $64 to $69 range through the end of January. The share price was caught up in the overall market selloff in late January and early February and lost 17.85% between closing at $69.62 on January 29 and closing at $57.24 on February 20, 2018. That share price was approximately 4.2% lower than it was one year earlier, but almost 11% higher than the 52-week low from March 2017.

The share price drop drove the total annual return down to just 1.34% over the past 12 months and 7.6% over the past three years. However, the investors that invested five years ago saw a total return of nearly 60% over that period.