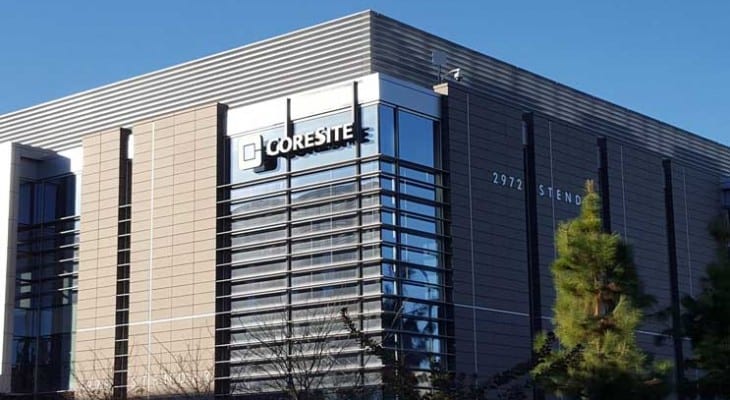 Over the last five years, the share price growth has nicely complemented the increasing dividend payments, despite a small stumble over the past 12 months. However, the annual dividend boosts managed to outpace the share price growth and, as a result, increased the company’s dividend yield to the current 3.8% level, which outperforms the average yields of CoreSite’s industry peers.

CoreSite will distribute its next dividend on the July 16, 2018 pay date. All shareholders of record prior to the June 28, 2018 ex-dividend date  will be eligible.

Based in Denver, Colorado and founded in 2001 as CRG West — a portfolio company of The Carlyle Group — CoreSite Realty Corporation delivers secure data center and interconnection solutions to private and corporate customers across eight key North American markets. In 2009, CRG West rebranded itself as CoreSite and became publicly traded on the New York Stock Exchange the next year. As of March 2018, the company operated 20 data centers with a combined space of more than 3.5 million square feet. CoreSite has located its data centers in eight major communications markets across the United States — Silicon Valley, Los Angeles, Denver, Chicago, Boston, Miami, the New York City metropolitan area and the Northern Virginia/District of Columbia area. These facilities currently serve more than 1,200 enterprises, network operators, cloud providers and supporting service providers.

CoreSite’s quarterly dividend distribution in mid-April was $0.98 per share, but the upcoming quarterly payout will be 5.1% higher at $1.03 per share. The annualized dividend amount is $4.12 and equates to a forward yield of 3.8%. Because CoreSite managed to continuously boost its quarterly dividend payouts and stay ahead of any share price growth, the current 3.8% dividend yield is therefore 23.2% higher than the company’s own 3.1% average yield over the past five years.

On another note, the company’s share price experienced only two noticeable pullbacks since the initial public offering (IPO) in 2010. Unfortunately for CoreSite’s shareholders, one of those pullbacks occurred in December 2017 and January 2018.