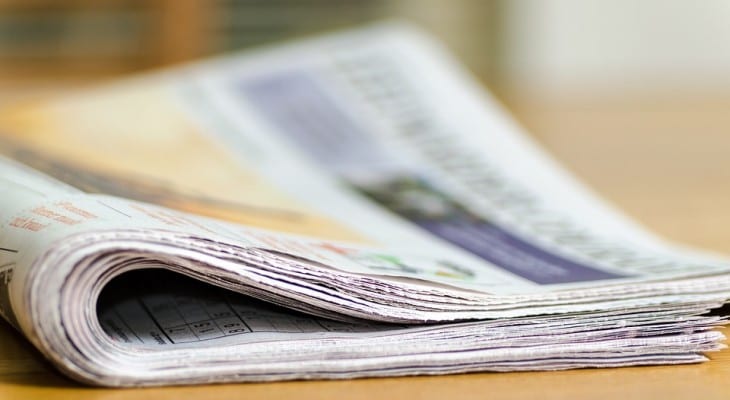 New Media Investment Group, Inc. (NYSE:NEWM) currently offers its investors an 8.6% dividend yield that outperforms the average yield of the industry by a significant margin, and a double-digit-percentage asset appreciation accompanies this outstanding dividend yield.

The company’s share price lost more than 50% of its value over a 26-month period that started in March 2015 but has been rising since a trend reversal in May 2017 and combined with the growing dividend income for a total return of more than 20% in the past 12 months. New Media Investment Group reported positive results in the fourth quarter of 2017 and for the entirety of 2017, as well as positive outlook in terms of revenue and earnings growth for 2018, which should be driven by continued improvement of the company’s organic same-store revenue growth.

The company will distribute its next dividend on the March 22, 2018, pay date to all its shareholders of record prior to the ex-dividend date, which will occur on March 13, 2018.

Based in New York, New York, and founded in 1987, New Media Investment Group Inc. owns and operates local media assets in the United States. The company’s principal products include 142 daily newspapers, 314 weekly newspapers and 124 shoppers with a total circulation of approximately 3 million. Additionally, the company operates 538 websites with more than 220 million unique page views per month, two yellow page directories with a total distribution of approximately 230,000 and Propel digital marketing and business services.

While the New Media Investment Group started distributing dividends to its shareholders only in the third quarter of 2014, the company managed to boost its annual dividend payout every year so far. The current $0.37 quarterly payout is 5.7% above the $0.35 dividend distribution amount from the same period last year. This new dividend amount converts to a $1.48 annualized payout for 2018 and currently yields 8.6%.

Since its inception, the company’s annual dividend has advanced at an average rate of 8.2% and the current annualized payout is 37% higher than its $1.08 total annualized yield from 2014. Additionally, the company’s current yield soars 325% above the average yield of the entire Services sector. Within the narrower group of New Media Investment Group’s peers in the Newspaper Publishing market segment, the company’s current 8.6% yield is 25.7% higher than the second-highest yield and 230% above the 2.6% simple average yield of all the companies in the segment. Even disregarding the companies that do not pay any dividends, raising the average yield to 4.68%, New Media Investment Group’s current yield is still more than 80% higher.

As already indicated, the share price was trending down for nearly two years as it entered the trailing 12-month period. Continuing that trend, the share price declined nearly 22% between March 1, 2017, and its 52-week low on May 17, 2017. However, after hitting its bottom in mid-May, the share price changed direction and embarked on its longest uptrend since 2014. Between the May bottom and its 52-week high of $17.40 on December 4, 2017, the share price gained 46.6% before encountering some resistance at that price level. The share price pulled back slightly and traded around $17.00 for the remainder of December 2017 and through January 2018.

The share price descent from its $24.00 all-time high in February 2015 caused shareholders to experience a 13.7% total loss on their investment over the past three years. However, the company rewarded investors that bought shares 12 month ago with a 20.5% total return on investment. Additionally, while the five-year total return of 56% is not very high for that time horizon, the total return is still much better than the medium-term double-digit-percentage loss over the past three years.