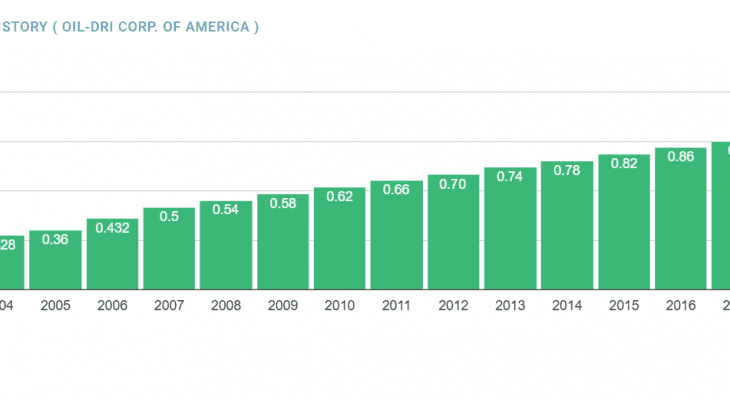 Oil-Dri Corporation of America (NYSE:ODC) rewarded its shareholders with 16 consecutive years of annual dividend boosts and currently offers a 2.3% yield.

Founded in 1941 and based in Chicago, Illinois, the Oil-Dri Corporation of America is a manufacturer and supplier of sorbent products for consumer and business-to-business markets. The company provides fluids absorption materials, drying agents, growing media and other products to pet care, animal health, fluids purification, crop & horticulture, industrial & automotive and sports field industries.

If the company continues to follow its own decade-long trend of raising quarterly payouts, we can expect a $0.01 dividend hike in the third quarter to $0.24. This increase would boost the total annual dividend for 2018 to $0.94 and bump the forward yield to 2.4%. Alternatively, the share price would have to rise at least 4.35% to keep up with dividend growth and to retain the current 2.3% level.

The company started distributing dividends in 1990, managed to avoid any dividend cuts in nearly three decades and boosted its annual dividend almost 80% of the time. Since 2002, the Oil-Dri Corporation hiked its annual payout at an average rate of 7.5% per year for 16 consecutive years and, consequently, enhanced its total annual distribution by almost 220%.

Please note that dividend data and charts could give the impression that the current streak of consecutive annual boosts is only five years. Based on the pay date, the total payout for 2012 was $1.06 and the 2013 total distribution was only $0.38. However, a portion of dividends for fiscal year 2013 – first and second quarter – was accelerated and paid out at the end of December 2012 as a single semiannual dividend distribution. Had the first and second quarters been paid at their regular intervals, the 2012 payout would have been $0.70, and the 2013 annual dividend would have been $0.74 – a 5.7% year-over-year enhancement.

The company’s share price traded flat at the onset of the current trailing 12-month period and reached its 52-week bottom price of $33.56 on February 8, 2017. Following a brief 6% rise over the following 90 days, the share price lost most all those gains in just two weeks and fell back to within 1.6% of the 52-week low. After that drop, the share price resumed a steadier growth and rose almost 25% by September 15, 2017.

While the share price went through considerable volatility over the past year, it did grow more than 17% over the trailing 12-month period and, combined with the $0.90 annual dividend distribution, provided shareholders with a 20%-plus total return.