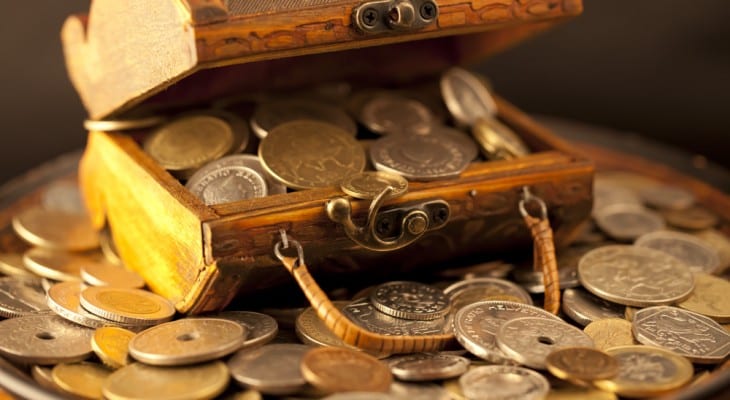 Gold served as money and as a store of value for most of human history, but fell out of favor with the advent of more sophisticated financial instruments. While certain financial advisors recommend holding some physical gold through coins and bullion bars, investors now have access to other financial instruments to build and safeguard wealth. With gold included in some of these new investment vehicles, gaining exposure to the precious metal is easier than ever. Savvy investors can take advantage of gold investments to hedge against currency inflation and interest rate fluctuations, as well as to generate income. These uses for gold investments can help in building a well-balanced portfolio. Aside from investing directly in physical gold, gold mining stocks and gold exchange-traded funds (ETFs) to take advantage of gold price increases, some investments pay out significant dividends that yield considerable income. Here are seven dividend-paying investments that tap into gold’s recent ascent. 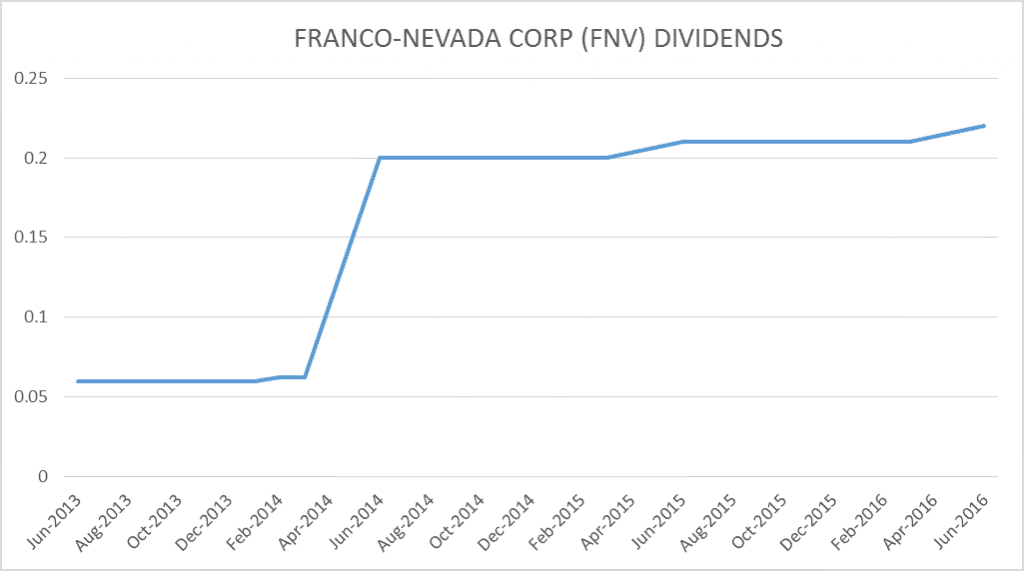 While the rate of dividend increase has slowed down slightly since the end of 2012, Royal Gold’s dividend payout has been increasing since January 2011. The most recent quarterly dividend paid in June 2016 was $0.23 – equaling a $0.92 annual dividend. The increasing dividend income accompanies a stock price rise of 184 percent between January and the end of June 2016. Therefore, this stock is worth considering as an investment to generate income and to build wealth. 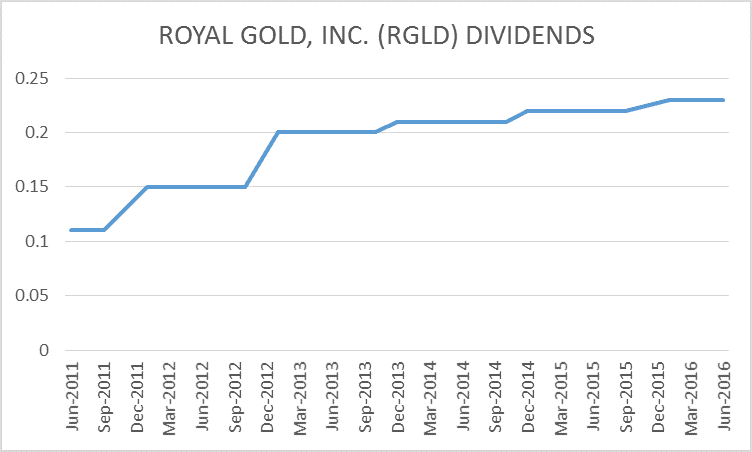 Randgold Resources Limited has paid out heightened dividends since 2007.  Additionally, the stock appreciated significantly — 79 percent — from the beginning of 2016 until June 30, 2016. Even  during the major market sell-off following the United Kingdom’s “Brexit” vote on June 23, 2016, when the U.S. markets lost about 3.5 percent, this stock increased 6.6 percent in just one day on June 24, 2016. This rebound indicaties that, in addition to increasing the total value of a portfolio and providing steady income, this stock should be considered as a hedge against market downturns. 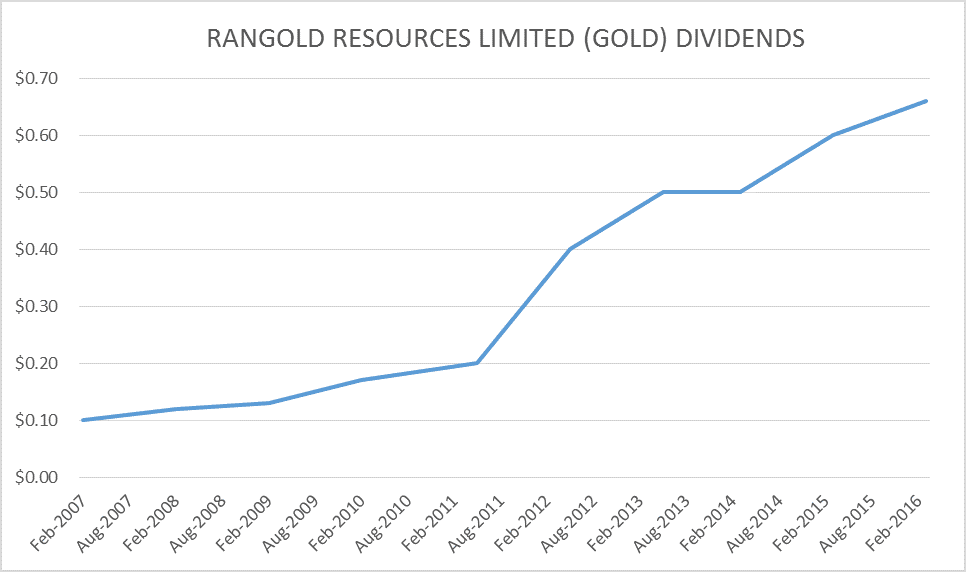 Unlike the first three examples, this stock is a more speculative play since it does not consistently pay a rising dividend. The stock price fell from a $4.26 high in 2015 to $2.33 in January 2016, but has regained some of those losses since then. In 2016, the stock actually jumped 27 percent by the end of June 2016. At $0.04 per share, the quarterly dividend is relatively low. The dividend fluctuated between $0.03 and $0.05. However, the stock is relatively affordable. It closed at $2.94 on June 30, 2016. Therefore, the expected $0.16 annual dividend payout translates to a 5.44 percent annual dividend yield. Additionally, the company announced in April 2016 that it would combine resources with Reservoir Minerals Inc. (TSX: RMC). Among other operational and cost-saving benefits, the combination will consolidate 100 percent ownership of the gold-copper mining project in the Timok region of Serbia. That project effectively spreads some of the geopolitical risk by developing a mine aside from other Nevsun Resources operations, which are now mostly in Africa. 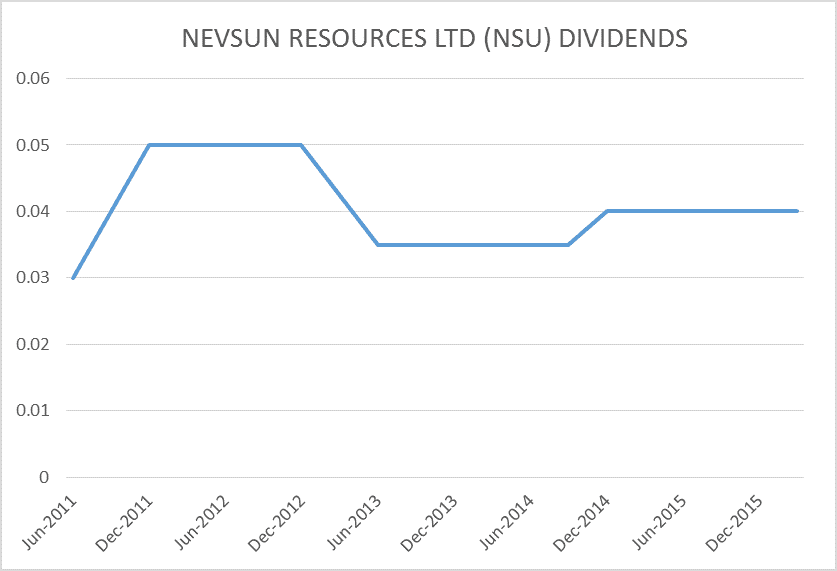 The stock price of Sibanye Gold, formed in 2012, has increased 124 percent for the first six months of 2016. The current stock price is 22 percent higher than the January 2015 stock price, which was the all-time high prior to the 2016 rally. The company typically pays two dividends a year. Its annual dividend has averaged $0.18 since the company’s formation. Excluding an uncharacteristically low $0.02 dividend paid in September 2015, the payout has fluctuated between $0.11 and $0.24. GFI Mining South Africa was spun off from Gold Fields Limited (NYSE: GFI) in 2012 and renamed Sibanye Gold Limited prior to its listing on the Johannesburg Stock Exchange. 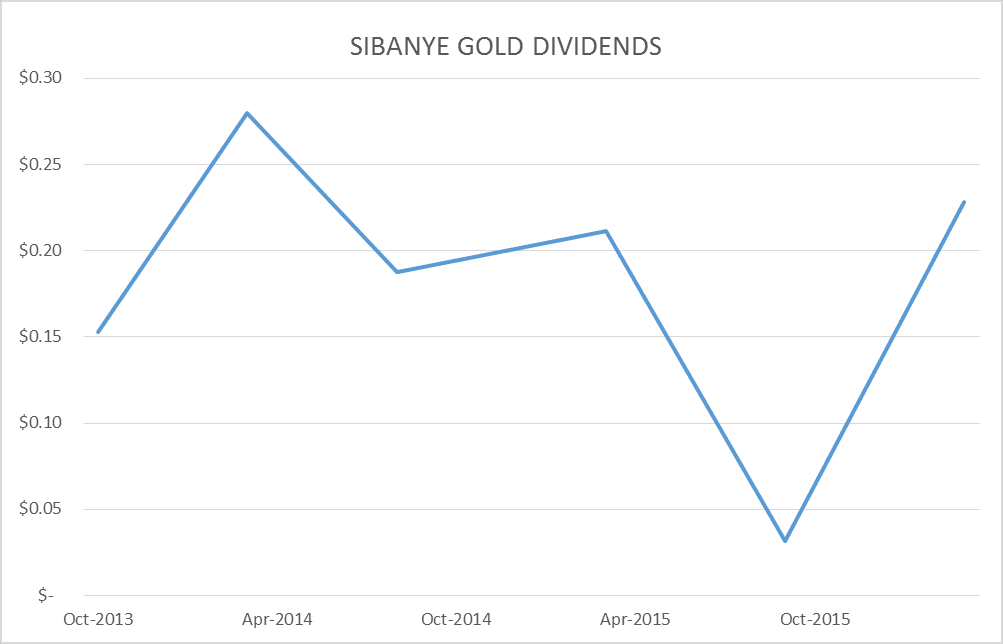 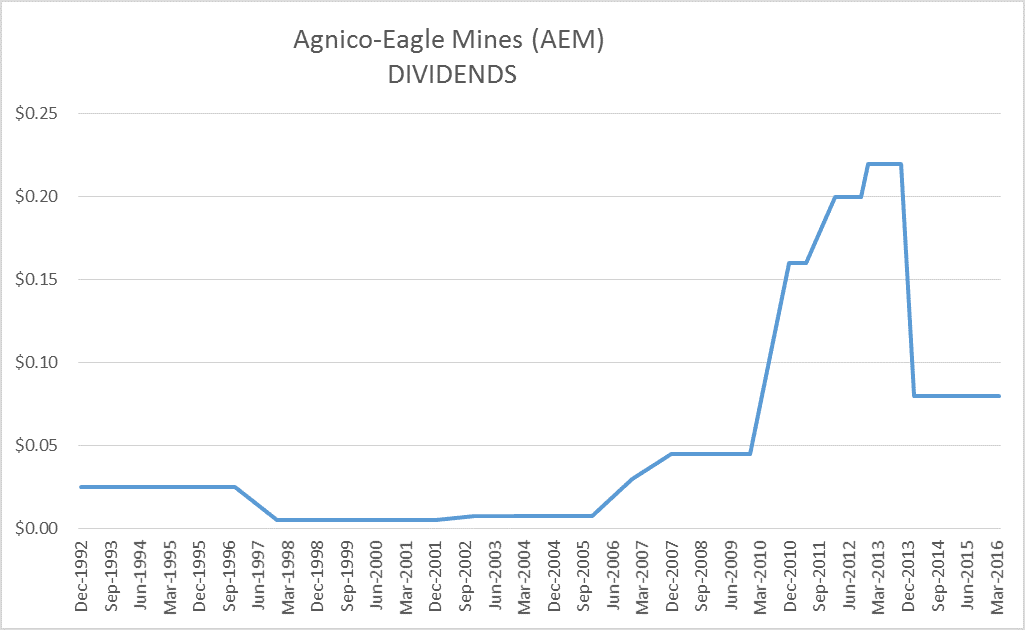 An alternative to dividend-paying gold stocks is to invest in dividend-paying ETFs and Exchange Traded Notes (ETNs). Such funds and notes can be useful parts of a well-balanced portfolio. An ETN is a debt instrument issued by a financial institution. As such, an ETN faces an additional risk in the event the issuing institution’s credit rating incurs a downgrade, even if the underlying asset appreciates. This Credit Suisse ETN currently is yielding more than 21 percent. Its most recent dividend payout in May 2016 was $0.19 but the dividend is monthly and thereby adds up fast. The share price lost almost half of its value since January 2013 and closed at $10.83 on June 30, 2016. As of January 2016, Moody’s short-term credit rating for Credit Suisse’s is P-1 and its long-term credit rating is A2. Standard & Poor’s ratings for Credit Suisse are A-1 and A, respectively. 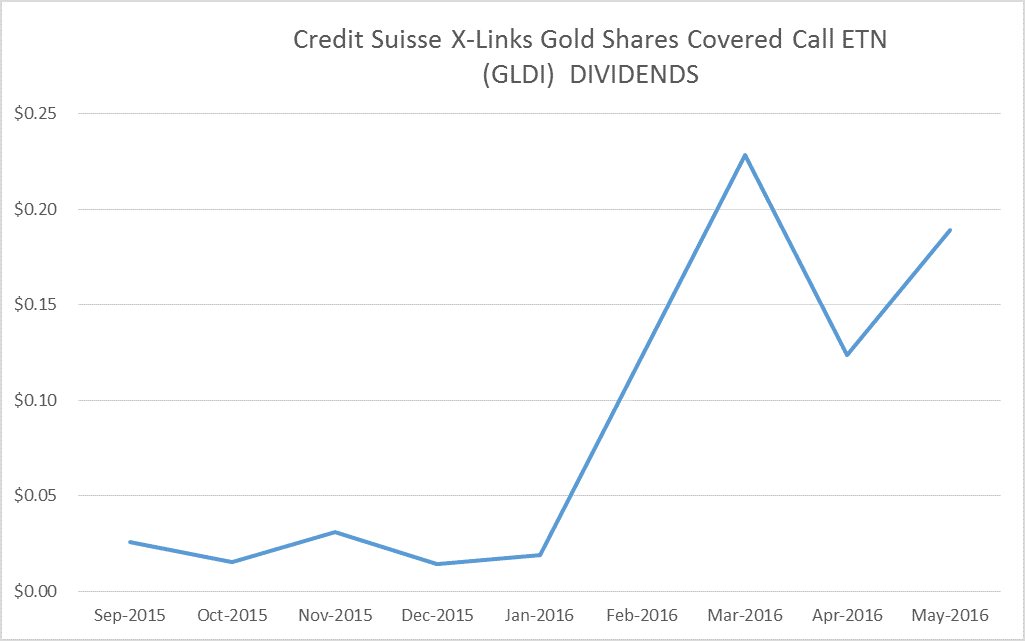 These seven dividend-paying gold investments are well worth considering for income seekers. As always, gold also serves as a hedge against market downturns and currency inflation. 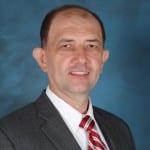 Ned Piplovic is the Assistant Editor of Website Content at Eagle Financial Publications. He graduated from Columbia University with a Bachelor’s degree in Economics and Philosophy.

Prior to joining Eagle, Ned spent 15 years in corporate operations and financial management. Ned writes for www.DividendInvestor.com, www.StockInvestor.com and www.RetirementWatch.com.