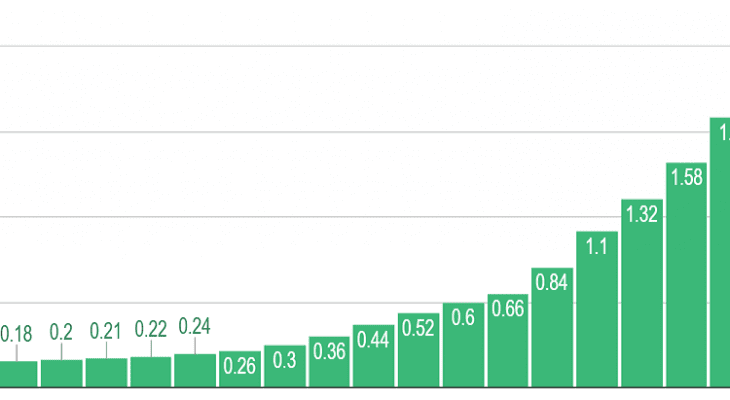 Two major equities maintained their record of boosting annual dividend payouts for more than a decade, while offering their shareholders dividend yields around 4.5%.

Share prices of both stocks have declined during the last 12 months. However, under the right circumstances, both companies could easily reverse the downtrends and turn the current share-price dip into a buying opportunity.

The current annual dividend of $2.40 per share is distributed quarterly and equates to a 4.6% dividend yield. Verizon has been paying a dividend since 1984 and has raised its dividends for the last 13 consecutive years. Over that period, the annual dividend payout grew at an average annual rate of 3.2%. The current yield is 8.2% higher than the five-year average yield of 4.3%.

Some of Verizon’s meager performance over the past year could be attributed to the recent competition from other providers that reintroduced unlimited data plans for their mobile phone services. However, now that Verizon is offering unlimited data plans as well, the company should be able to compete for customers by leveraging its wide service coverage and network reliability. If the company resumes growth and the share price follows the trend, the current price drop could be a good opportunity to take a long position in the stock while enjoying the benefits of a steady dividend income.

Like most of the brick-and-mortar retailers, Target has struggled a little over the last 18 months. The result was a stock price volatility and a general downward trend. Target’s current share price as of March 23, 2017 was $53.14, which is 35% lower than one year ago.

While the share price underperformed, Target’s dividend performance has exceeded the retail sector average by a wide margin. The company has been paying a dividend for 52 years and increasing its dividend for the last 45 consecutive years.

The current quarterly dividend of $0.60 converts to a $2.40 annual distribution and a 4.5% yield. Over the past 20 years, the company has boosted its annual dividends by an average of 16% per year. Consequently, the current annual payout is almost 20-fold higher than the payout two decades ago.