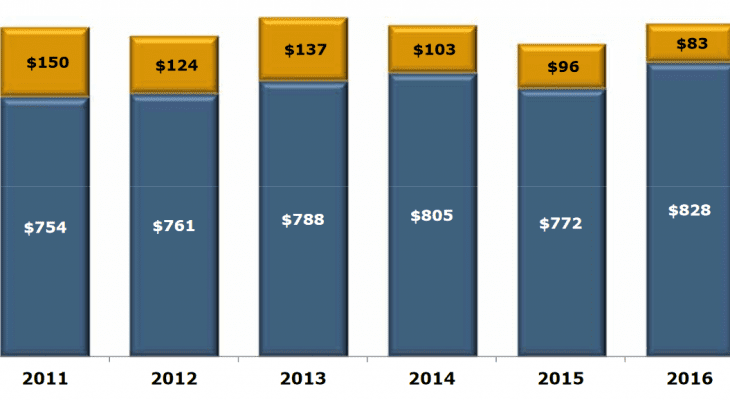 An electric utility and a gas utility company are paying rising dividends that yield 3.1%, which is about 25% higher than the straight average dividend yield across the entire utilities sector.

While the share prices of both equities experienced some volatility in the past two years, both share prices are trending upward, which provides moderate asset appreciation to complement the substantial dividend income gains. The ex-dividend dates for the two equities are just one day apart on July 27, 2017 and July 28, 2017, with pay dates occurring in mid-August and early September 2017.

As of June 2017, the company serves approximately 1.2 million customers in 11 out Arizona’s 15 counties and expects to add 700,000 new customers. By 2030. Pinnacle West Capital Corporation – Arizona’s largest and longest-serving electric company – has its headquarters in Phoenix, Arizona, where it was founded in 1920.

The company’s current quarterly dividend distribution of $0.655 per share converts to a $2.62 annual payout. Based on those amounts and the current share price, the current dividend yield is 3.1%, which is 23% above the straight average dividend yield for the utilities sector.

In addition to offering above-average yields, the company has a record of sustaining those yields for extended periods. While the current streak of consecutive annual dividend boosts stands at six years, PNW has not cut its annual dividend payout in more than two decades. The company failed to hike its dividend payout and paid a flat $2.10 amount between 2007 and 2011.

However, after resuming dividend hikes in 2012, the company enhanced its annual payout every year at an average growth rate of 3.8% over the past six consecutive years. Even with five years of flat dividend distribution, the 4.3% average dividend growth rate over the last 20 years is even higher the recent streak’s growth rate.

The Gas Storage segment further delivers underground storage services and holds leases and other property interests in approximately 17,000 net acres of underground natural gas storage in Oregon and California. Northwest Natural Gas Company’s current headquarters are in Portland, Oregon, just a few blocks from its original site where the company was founded in 1859.

Because of an uncharacteristic share-price spike between May and August 2016, the current price is about 4% below the July 2016 level. However, as the graph below shows. expanding the time frame and looking at the last 24 months indicates a share-price growth of more than 40% between the price in July 2015 and the current closing price on July 14, 2017, of $60.35.

The shareholders receive a $0.47 quarterly dividend distribution, which converts to a $1.88 annual payout and a 3.1% dividend yield. The company’s history of paying dividends shows a steady long-term growth trend. Northwest Natural Gas started paying a dividend in 1952 and began to boost its dividend payouts just a few years later. The company has boosted its annual dividend consecutively for the past 61 years. Over the past two decades, the company enhanced its annual payout at an average rate of 2.2% every year.