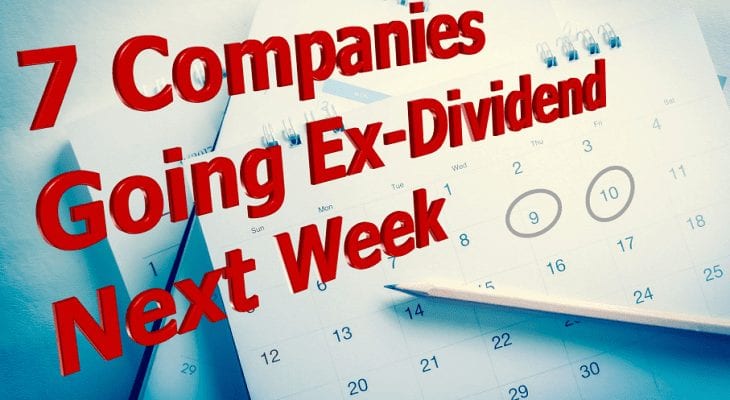 Therefore, investors interested in capturing dividend distributions from large-cap companies should expedite their own detailed analysis and move quickly. All seven companies listed below have their ex-dividend dates on May 9 or May 10 and distribute quarterly dividend payouts.

Any equity analysis can be made very complex to increase the likelihood of selecting the best stock picks for a particular investment strategy. Many service providers and financial advisory sites offer selection tools, such as the Dividend Screener tool available at DividendInvestor.com. However, the selection of the seven equities on the list below involved just two criteria — ex-dividend dates between May 7 and May 10, 2019, and market capitalization of at least $100 billion.

Sorted by dividend yield in ascending order, below are the seven large-cap companies going ex-dividend next week.

Costco rewarded its shareholders with a 14% hike from $0.57 in the previous period to the current $0.65 payout, which corresponds to a $2.60 annualized distribution and a 1.08% forward yield. This current yield is 8% below the 1.17% simple average yield of Costco’s peers in the Discount & Variety Stores industry segment.

Costco has increased its regular annual payout every year since dividend introduction in 2004 for a total gain of 550%, which is equivalent to an average annual growth rate of 13.3%. In addition to its increasing regular payouts, Costco distributed significant special dividends in three out of the last eight years — $7 in 2012, $5 in 2015 and $7 in 2017. On average, these special dividend payouts were equivalent to 416% of regular annual payouts in those three years.

Driven primarily by Costco’s share price growth, the company rewarded its shareholders with a 24.2% total return over the past 12 months. Total returns over the past three and five years were 75% and 131%, respectively.

Since resuming dividend distributions in 2012, Apple, Inc. doubled its annual dividend over the past seven years, which corresponds to an average annual growth rate of nearly 11%. The company’s upcoming quarterly dividend distribution of $0.77 is 5.5% higher than the $0.73 payout one year ago and converts to a $3.08 annualized distribution amount.

Apple’s current 1.46% yield outperformed the 0.95% simple average yield of the overall Technology sector by 54%. Additionally, Apple’s current yield is also 90% above the 0.77% average yield of the Personal Computers industry segment. Apple’s robust share price growth combined with rising dividend income for a total return of nearly 24% over the past 12 months. Additionally, the company rewarded its shareholders with total returns of 123% and 152% over the last three and five years, respectively.

Despite a share price pullback of nearly 15% since the beginning of March because of implications of the two recent 737 MAX variant crashes, the Boeing Company still delivered robust returns over the past year. Boeing enhanced its quarterly dividend more than 20% from $1.71 last year to the current quarterly distribution of $2.055. The current dividend payout is equivalent to an $8.22 annualized payout and a 2.18% forward yield. While slightly lower than Boeing’s own 2.25% five-year average, the current 2.18% yield is 93% above the 1.13% average yield of the entire Industrial Goods sector, as well as 125% higher than the 0.97% simple average yield of the Major Diversified Aerospace & Defense industry segment.

Boeing advanced its annual dividend payout nearly five-fold over the past eight consecutive years for an average growth rate of 22% per year. Even with four missed hikes, Boeing increased its annual dividend nearly 20-fold over the past two decades, which is equivalent to a 16% average annual growth rate. Despite the recent share price decline, the company still delivered a 16% total return over the last year, tripled shareholder investment over the past three years and provided a 212% total return over the trailing five-year period.

Pfizer’s upcoming quarterly payout of $0.36 represents an enhancement of nearly 6% over the $0.34 payout amount from the same period last year. The new quarterly distribution corresponds to a $1.44 annualized payout and currently yields 3.66%, which is 6.6% higher than Pfizer’s own 3.43% average yield over the past five years.

Furthermore, WFC’s current yield is 22% higher than the 3.07% average yield of the overall Financials sector, more than double the 1.82% yield average of the Money Center Banks industry segment and 35% above the 2.77% average yield of the segments only dividend-paying companies. WFC enhanced its annual dividend nine-fold since resuming rising dividend distributions in 2011. The average annual growth rate over the past nine consecutive years is 27.7%.

The Exxon Mobil Corporation has enhanced its annual dividend payout amount every year for the past 36 consecutive years. Just over the past two decades, Exxon Mobil enhanced its annualized dividend payout more than 450%, which is equivalent to an average annual growth rate of nearly 9%. The company’s current $0.87 quarterly dividend amount corresponds to a $3.48 annualized payout and a 4.42% forward dividend yield.

This current dividend yield is 21.5% higher than the company’s own 3.64% average yield over the past five years and is nearly twice the 2.27% average yield of the overall Basic Materials sector. The current yield is also nearly 30% higher than the 3.41% average yield of the Major Integrated Oil & Gas industry segment. In addition to the strong dividend income, Exxon Mobil also delivered rising asset appreciation. While the company delivered a 6.7% total loss over the five-year period, the three-year total return was 2.4%. Furthermore, the company’s total return over the past 12 months exceeded 8.5%.

The International Business Machines Corporation has not missed a quarterly payout since introducing dividend distributions in 1916. Additionally, IBM has enhanced its annual dividend payout over the past 23 consecutive years. During that period, the company advanced its annual distribution more than 26-fold. This advancement pace corresponds to an average annual growth rate of 15.5% per year.

IBMs most current dividend hike boosted the quarterly payout 3.2% from $1.57 in the previous quarter to the current $1.62 distribution. The current annualized payout of $6.48 corresponds to a 4.61% forward yield, which is 26.7% above IBM’s own five-year yield average of 3.64%.

In addition to outperforming its own five-year average, IBM’s current yield is nearly five-fold above the 0.94% average yield of the entire Technology sector. The 4.6% current yield is also almost 140% higher than the simple average yield of the Diversified Computer Systems industry segment, as well as 20% above the 3.85% yield average of the sector’s only dividends-paying companies.