Philip Morris International Inc. (NYSE:PM), a major manufacturer of cigarettes and tobacco, raised its dividend for the 11th straight year to boost its dividend yield to 5.5% in the face of a 26.82% stock price drop in the past 12 months.

A quarterly dividend increase to $1.14 per share, up from $1.07 per share, should appeal to income investors if the company can halt its share-price plunge. The company’s stock fell 6% in March 2018 but has resumed rising in the past month. 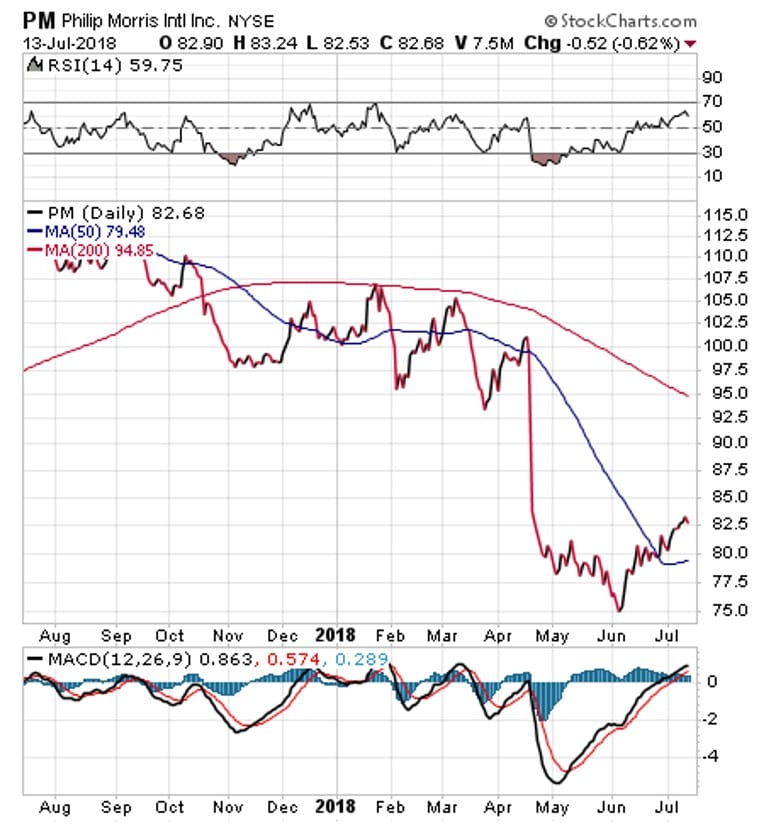 Reasons Behind the Slide of Philip Morris

Aside from the documented health risk of smoking tobacco, the decline in the company’s stock price seems to have been worsened in the past year by the rising popularity of e-cigarettes made by competitors and questions about whether the new ones truly are healthier than standard cigarettes.

As a result, sales are slowing at Philip Morris and other conventional cigarette companies. A key challenge is whether traditional tobacco companies can transition successfully into the e-cigarette business.

To that end, tobacco companies such as Philip Morris collectively have spent billions of dollars to market and to research tobacco-heating devices for e-cigarettes. Even so, the share price of Philip Morris has suffered in the past year, while the Dow Jones Industrial Average has risen 14.91%.

Philip Morris has invested more than $4.5 billion since 2008 to develop smoke-free products, such as IQOS, an acronym for I-Quit-Ordinary-Smoking. That product, sold by Philip Morris brands Marlboro and Parliament, was rolled out in selected markets on June 26, 2014.

IQOS features a device that heats tobacco until it is warm enough to emit an aerosol that is not intended to be hot enough to cause combustion, which is the chemical process responsible for producing toxins in cigarettes. However, a federal advisory committee in January 2018 recommended that the Food and Drug Administration reject the company’s bid to market its smokeless tobacco stick product in the United States as safer than traditional cigarettes.

Can Philip Morris Recover from its Fall?

Past financial success has helped the company build cash to fund research and development of alternative cigarettes and other products, as well as pay dividends to shareholders. Philip Morris also has well established brands favored by its existing customers. The most popular Philip Morris brand is Marlboro and its products are sold in almost 180 countries.

A positive development is that the introduction of smoke heating devices such as IQOS has increased the revenues at Philip Morris. In fact, Philip Morris had a temporary shortage of heat sticks, indicating demand for such alternatives is on the rise.

Even though the company seems to be on a decline due to its share-price drop, IQOS devices provide a potential bridge to future growth.

Philip Morris certainly offers appeal to investors who like its dividend. As long as the company keeps boosting its payouts as it seeks to position its business for future growth with its IQOS product, interest in the shares should keep the company’s stock price from plunging. However, the uncertainty about the ultimate transition of the Philip Morris business model away from traditional cigarettes warrants caution.