Three top dividend funds to buy feature the cream from investment firm Cohen & Steers, offering high yields and protection from the worst damage if the market tanks again in the weeks and months ahead.

The three top dividend funds benefit from “active portfolio managers” who can choose their holdings, unlike inflexible funds whose portfolios track the performance of a market index, such as the Dow Jones Industrial Average, the Standard & Poor’s 500 or the NASDAQ. During the stock market drop in March, active managers could curb their risk by scooping up quality assets that were selling at deep discounts. 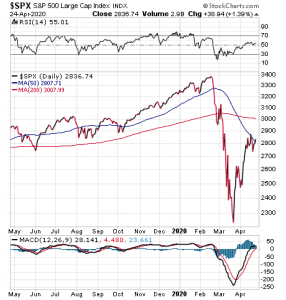 “There was a lot of forced selling in March because leveraged investors faced margin calls as prices declined,” said Bob Carlson, who is chairman of the Board of Trustees of Virginia’s Fairfax County Employees’ Retirement System with more than $4 billion in assets. “To raise cash, they had to sell assets. They sold high-quality assets because there were no buyers for low-quality assets at the time.”

Carlson, who mostly recommends funds in his Retirement Watch advisory service, said leveraged investors who held high-quality assets dumped them in distress sales. The selling turned the quality assets into “bargains” for others, he added.

One of three top dividend funds favored by Carlson is Cohen & Steers Preferred Income & Securities (NASDAQ:CPXAX), with a current dividend yield of 5.47%. The fund seeks total return through high current income and capital appreciation by investing in preferred and debt securities issued by U.S. and non-U.S. companies. 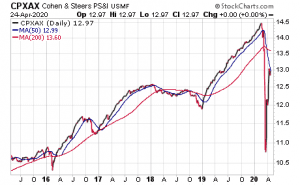 At year-end 2019, 49% of CPXAX’s holdings were in financials, while 25% were in insurance and 7% in utilities, according to Cohen & Steers. CPXAX offers a “fairly conservative” way to invest in preferred securities because it is an open-end fund, and therefore steers clear of leverage, Carlson said. 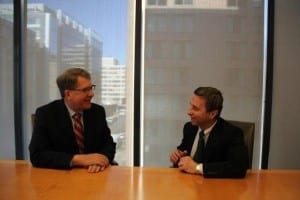 Bob Carlson responds to Paul Dykewicz’s questions during an interview.

Another fund recommended by Carlson is Cohen & Steers Limited Duration Preferred & Income (NYSE:LDP), featuring a dividend yield of 8.57%. Before the stock market crash in March, the closed-end fund was priced around its asset value in the previous months, selling at either small discounts or premiums to net asset value (NAV), he added.

But in March, the share price dropped sharply in a matter of days and declined far more than the investments held by the fund. At one point, LDP was priced at almost a 30% discount to its net asset value.

Once the Fed provided liquidity to the markets and stocks rebounded, the fund recovered significantly, Carlson said. It most recently sold at a 0.37% discount to net asset value, which compares to a three-year average discount of 3.14%.

A third recommendation from Carlson is Cohen & Steers Infrastructure (NYSE:UTF), which had been selling at around a 5% to 6% discount to net asset value. During the market panic, the share price fell more sharply than the net asset value and the fund sold at a big discount.

The share price bounced back strongly when the Fed stepped into the liquidity markets. The gap hasn’t been fully closed with UTF. It recently sold at a 7.79% discount to net asset value, compared to a three-year average discount of 6.28%. UTF has a higher margin of safety now than before the pandemic, Carlson said.

“I also like UTF because most infrastructure companies have relatively stable cash flows and strong balance sheets,” Carlson said. “Their attractive dividends should be maintained or at least will be maintained better than those at many other companies.”

However, exceptions exist with transportation-related companies that are suffering as travel grinds to almost a halt, Carlson said. Energy-related infrastructure firms also are having trouble, he added.

“We have an advantage because UTF is an actively managed fund with a global mandate,” Carlson continued. “It doesn’t have to invest in certain companies, industries, or countries simply because they’re in an index.”

For example, UTF actively reduced its exposure to transportation and energy as the pandemic developed, Carlson said. Industries less sensitive to the economic cycle have been increased, he added. 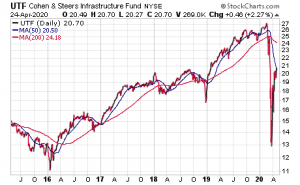 Cohen & Steers, the fund company where Carlson found his three top choices, is a global investment manager specializing in assets consisting of real estate securities, infrastructure and natural resources equities, as well as preferred securities and other income investments.

ALL ARTICLES
Ticker Symbol Lookup:
Quickly find stocks on the NYSE, NASDAQ and more
My #1 Monthly Dividend Payer for 2021
The ‘Preferred’ Way to Collect a 10% to 11% Yield
Enter Your Email below to get your FREE report: