Gain Increased Dividends and 7%-Plus Yields with These 5 Investments

To avoid overpaying for the dividends, here are a few investments that you can buy ahead of dividend announcements to increase your return with minimal risk. A key reason to buy these stocks is that all of the picks have a long history of high yields and rising dividend payouts.

All five companies have dividend yields of at least 7 percent. Additionally, three of the five suggestions have a long history of increasing dividends and the other two have tripled their share price in 2016. Four of the companies are in the energy infrastructure industry and one company is a real estate investment trust (REIT) that serves the long-term health care industry. 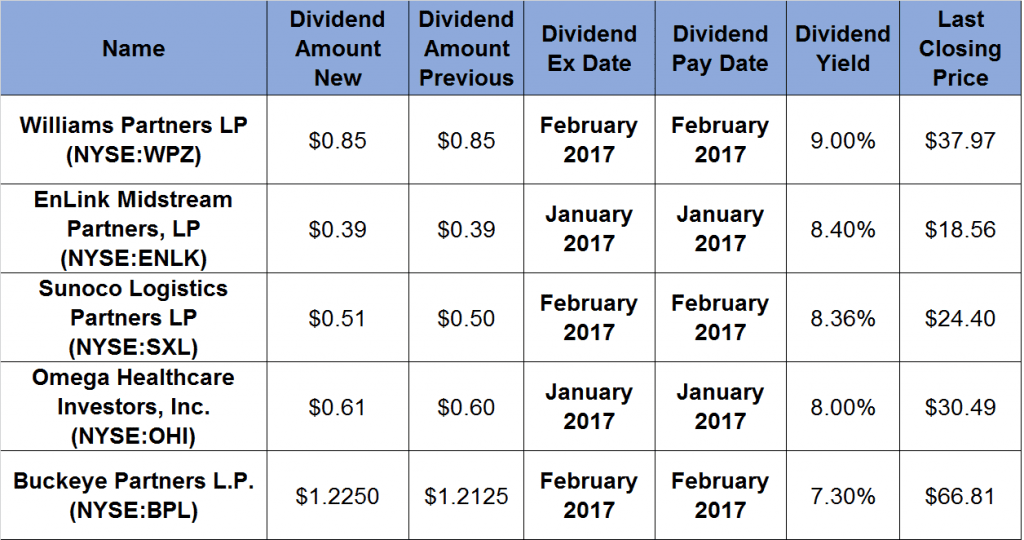 Its quarterly dividend of $0.39 translates to a $1.56 annual payout with an 8.4% yield. The annual dividend for 2016 is 2% higher than it was last year. This continues the increasing dividend strategy that ENLK has been following since 2010. After raising dividend payouts more than 150% between 2003 and 2008, the company cut its dividend drastically in 2009 and 2010 to $0.25. However, the dividend has been growing every year since and has increased more than six-fold.

Additionally, EnLink Midstream Partners’ stock price almost tripled since the 52-week low of $6.32 on February 18, 2016. Its current share price is down 7% compared to its September 2016 high. However, it remains 194% above the February low.

Its annual dividend for 2016 is 15% higher than it was last year. The dividend has been increasing for the past 14 consecutive years. During that time, the dividend failed to record a double-digit percentage year-over-year increase only once. Its total annual dividend is distributed quarterly. The most recent installment of $0.51 was paid on November 14, 2016.

OHI has been paying dividends for the past 24 years. Its dividend payout has increased for the last 13 consecutive years. Current annual dividends of $2.44 yields 8%. That yield level is 23% higher than the five-year dividend yield average of 6.5%.

Buckeye’s current quarterly dividend of $1.225 equals a $4.90 annual payout and a 7.3% dividend yield. That level of yield, while impressive on its own, is the lowest in this group. However, BPL could be a long-term investment opportunity. The company has been paying dividends since 1990 and increasing the dividend payout every year for two decades.

Additionally, Buckeye’s share price grew consistently since BPL became publicly-traded in 1986, with only two significant decreases of more than 25% in 2009 and 2012. However, both times the share price rebounded and reached new highs that were 25% higher than the ones prior to price corrections.

If you do not wish to invest in individual stocks, you could gain exposure to the four energy infrastructure stocks by investing in the Alerian MLP ETF (NYSE:AMLP). This ETF has almost a fifth of its $9.4 billion in total assets allocated in these four stocks. The average trading volume of AMLP is about 8 million shares per day and its expense ratio is 0.85%.

In addition to e-mail alerts, you will have access to our powerful dividend research tools. Take a quick video tour of the tools suite.