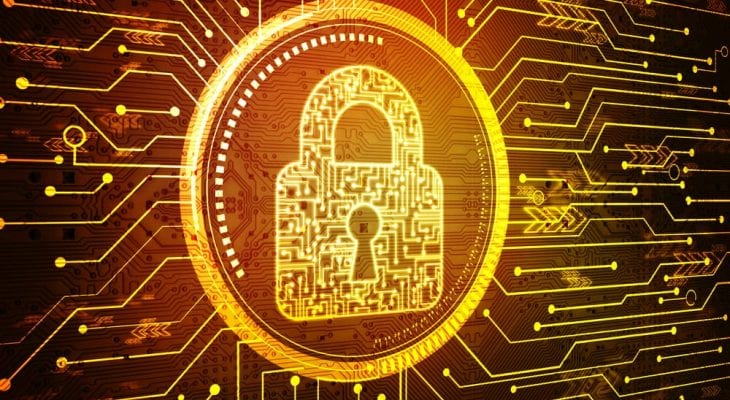 Three dividend-paying cybersecurity investments to buy feature household names such as Cisco Systems Inc. (NASDAQ:CSCO), Microsoft (NASDAQ:MSFT) and other companies in the field that are included in a well-regarded exchange-traded fund for investors who want diversification within the industry.

The three cybersecurity investments to purchase offer ways to profit from intellectual property protection and their importance shined on July 21 when the U.S. Department of Justice announced an 11-count indictment by a federal grand jury charging two hackers who work for the People’s Republic of China with invading the computer systems of hundreds of victims. The companies, governments, non-governmental organizations, dissidents, clergy and democratic and human rights activists in the United States and abroad were among the targets of this alleged state-sponsored espionage.

The indictment asserted that the hackers stole terabytes of data to pose a “sophisticated and prolific threat” to U.S. networks. The alleged cyber thieves also targeted Western medical researchers who are seeking to develop a vaccine to help fend off the devastating human toll of COVID-19, a virus that originated in Wuhan, China.

Cisco Systems’ stock and its 3.04% dividend yield offer appeal for investors who want to buy shares in a technology company that pays them to stay patient amid market plunges.

Cisco Systems, of San Jose, California, develops, manufactures and sells networking hardware, telecommunications equipment and other high-technology services and products. It managed to  overcome the challenge of U.S.-China trade disputes in the last few years when its top leaders mitigated almost the entire effect of 25% tariffs by improving its supply chain position and by increasing its prices, according to an analysis by Goldman Sachs. 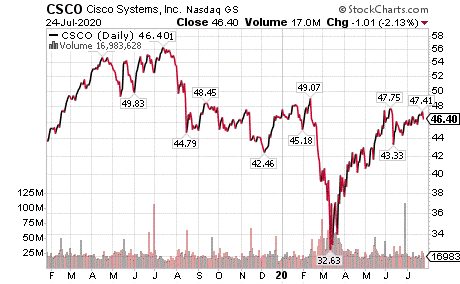 Mark Skousen, PhD, an economist who is a Presidential Fellow at Chapman University, recommends Cisco as one of the Flying Five stocks in his investment newsletter, Forecasts & Strategies, offering dividend-paying companies that feature a handful of the five lowest-priced stocks among the 10 highest-yielding ones in the Dow Jones 30. Those stocks are updated each August and tend to outperform the market annually, but not always since he began using the strategy in 1994.

Skousen’s recommendation of Cisco on March 9 to replace another stock nearly kept the Flying Five’s streak of beating the market intact as the new position soared 25.0% from $38.20 to $47.02, aided by a 3.07% dividend yield that has included 72 cents per share in payments.

Cisco, a high-end industry leader in technical performance, has been locked in a global competitive struggle against China’s Huawei for years. It costs plenty of money to keep packing more ports and connections into Cisco’s devices every year to keep up with network load, so the company passes that research and development (R&D) expense along to customers who need the premium speed, said Hilary Kramer, host of a national radio program called “Millionaire Maker.”

On the other side, there is China’s Huawei, which treats networking as a commodity business in which the company simply throws routers and switches at a problem to offer a solution, as long as the equipment is built cheaply enough and replaced in large volumes when it breaks, said Kramer, who leads the Value Authority and GameChangers advisory services. These are not meant to be “disposable devices,” but the lowest-cost approach appeals to small, price-sensitive enterprise customers with limited budgets, she added.

Cisco Systems remains a technology leader and has impressed Goldman Sachs and others with its resilience. If the company’s management stays on course, its shareholders could be rewarded with further strong returns. The company received a downgrade to neutral from overweight on July 16 from JPMorgan due to a lack of visibility about the company’s return to revenue growth. However, the investment firm maintained its price target of $50, which now is less than $3 away.

The company gained mixed reviews in June from Bank of America, which upgraded the stock to “buy” from “neutral” and boosted its target price to $55 from $48. Investment firm RW Baird reduced its rating on Cisco to “neutral” from “outperform” but held its target price at $48.

Bob Carlson, leader of the Retirement Watch advisory service and chairman of the Board of Trustees of Virginia’s Fairfax County Employees’ Retirement System with more than $4 billion in assets, told me a conservative but profitable way to invest in cybersecurity is through ETFMG Prime Cyber Security (NYSEARCA:HACK).

The exchange-traded fund (ETF), launched in 2014, has trailed broad technology indexes during bull markets, Carlson said. On the other hand, the ETF so far has had good defensive characteristics, he added.

The fund achieved a positive return in 2018 of 6.72%, when most equities and especially technology stocks declined for the year. The ETF also is up more  than 15% since Carlson recommended it to me for a column on December 31, 2020, aided by its 1.81% dividend yield.

Top holdings in the fund include Sophos Group PLC (NASDAQ:SPHHF), Carbonite (NASDAQ:CARB), Splunk (NASDAQ:SPLK), Fortinet (NASDAQ:FTNT) and Avast (NASDAQ:AVST). The ETF seeks to each holding to no more than 3% of its overall portfolio.

Since the ETF is thinly traded, take care when investing in it, Carlson counseled. Use a purchase price limit instead of a market order, he added. 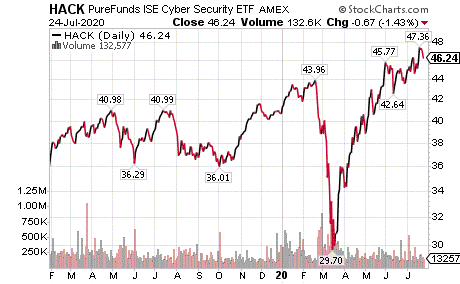 “Cisco is the top holding of HACK, so you get exposure that way,” Nowinski said. “Moreover, many of the other top 10 holdings of HACK are actually best-in-class solutions in their respective markets.”

The company’s software helps customers build a virtual “fortress” around their data, and it does this chiefly through its firewall software, Woods said.

“Fortinet also has targeted the latest trend in the cybersecurity markets, the so-called software-defined wide area networks. This is a relatively new computer networking technology, and experts say this is the next frontier in the cloud computing and cybersecurity technologies.”

“The world is going to keep getting more and more cyber, and that means opportunists of all sorts are going to try to exploit the weaknesses in cyber systems,” said Jim Woods.

Sunnyvale, California-based Fortinet, a holding in HACK, reported first-quarter 2020 revenue of $577 million, a 22% jump year over year. Billings jumped 21% year over year, reaching $667.8 million. Earnings per share rose 30% to 60 cents per share. However, Fortinet currently does not pay a dividend, so income investors will need to look elsewhere for now but may want to track this stock.

Woods also teams up with Skousen on the Fast Money Alert trading service and recently notched a 93%-plus gain for those who follow their recommendations, fueled by the runaway rise in electric vehicle manufacturer Tesla, Inc. (NASDAQ:TSLA). 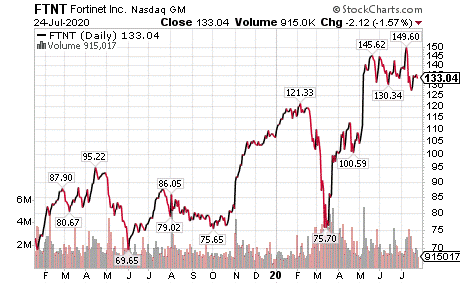 “Microsoft is all about the cloud,” Woods told me. “The pandemic has created a work-from-home society, and that has created greater demand for safe and secure cloud computing services such as those offered by the software giant.”

Woods recommends MSFT, which offers a current dividend yield of 1.01%, in his Prime Movers portfolio in Successful Investing, and he recently banked a 16.3% in the stock in his Intelligence Report Tactical Trends Portfolio.

Microsoft retreated after reporting its latest quarterly results that showed reduced growth and raised questions about its current valuation. In a zero-interest-rate environment, Microsoft’s price peaked at 37 times forward earnings and 8 times its revenue.

But in a world where leverage is cheap and growth is scarce, a little hope goes far, Kramer said. While the quarantines slowed Microsoft, do not expect earnings deterioration, she added.

Microsoft’s management affirmed guidance for earnings growth of about 7% in the coming year. Compared to the S&P 500, where profit contracted 44% last quarter, and may end 2020 with a 20% drop, dividend-paying Microsoft stands out.

“Everything else being equal, I’d rather own Microsoft than the S&P 500 as a whole,” Kramer said. “However, the time to buy in was when the stock had been beaten down to $135 just four months ago. At the bottom, mighty Microsoft was available for only 23 times earnings. This was clearly a bargain that Wall Street couldn’t ignore.” 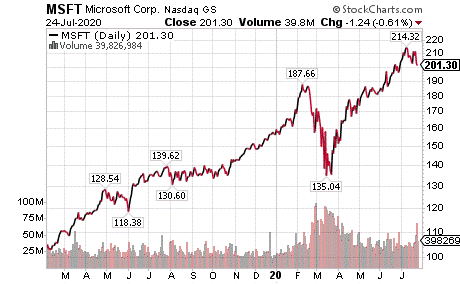 Nowinski cautions that Microsoft perennially loses market share in the cybersecurity niches of email, identity and endpoint security where it operates. The company is more focused on fixing “vulnerabilities” in Windows, which is a “huge source of breaches,” than in providing a best-in-class solution in any of those three areas, he added.