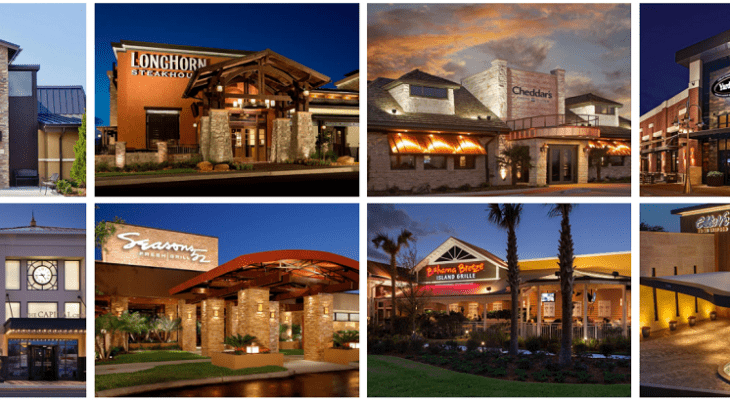 Darden Restaurants, Inc. (NYSE:DRI) raised its annual dividend 12 out of last 14 consecutive years, provided its shareholders with a total return of nearly 30% over the past year and currently pays a 2.7% yield, which exceeds the average industry yield by more than 40%.

In addition to the above-average yield, the other component that drove the high total return is the considerable asset appreciation of more than 28% over the last 12 months. The company’s next ex-dividend date will occur on January 9, 2018, and the pay date will be approximately three weeks later on February 1, 2018.

Founded in 1968 and based in Orlando, Florida, Darden Restaurants, Inc., through its subsidiaries, owns and operates full-service restaurants in the United States and Canada. As of June 27, 2017, the company owned and operated approximately 1,700 restaurants under the Olive Garden, LongHorn Steakhouse, Cheddar’s Scratch Kitchen, Yard House, The Capital Grille, Seasons 52, Bahama Breeze and Eddie V’s brands. In its quarterly earnings call on December 19, 2017, the company’s management announced that in the most recent quarter total sales rose 14.6%, with same-restaurant comparable sales growing 3.1%. Adjusted diluted earnings per share grew 14.1% to $0.73. Additionally, the company distributed $78 million in dividends to its shareholders and repurchased $89 million worth of its shares.

The company’s current $0.63 quarterly dividend is 12.5% higher than it was in the same period last year. This current quarterly payout converts to a $2.52 annualized distribution and currently yields 2.7%. That 2.7% yield level outperformed the 1.86% average yield of the Services sector by 42% and exceeds the $1.68% average yield of Darden Restaurants’ peers in the Restaurants segment by 57%.

The company’s current streak of consecutive dividend boosts is only two years. In 2015, Darden Restaurants paid the same $2.20 annual payout as it did in 2014 and then cut the annual distribution amount 3.6% to $2.12 in 2016. However, 2016 was the only dividend cut that the company made since it started paying dividends in 1995.

The result of a compounded growth at such a high rate is that the current annualized dividend distribution for 2018 is 31.5 times higher than the total annual dividend paid in 2004. Even if we only consider the current two-year streak of dividend hikes, the company still managed a dividend growth rate of 9% per year.