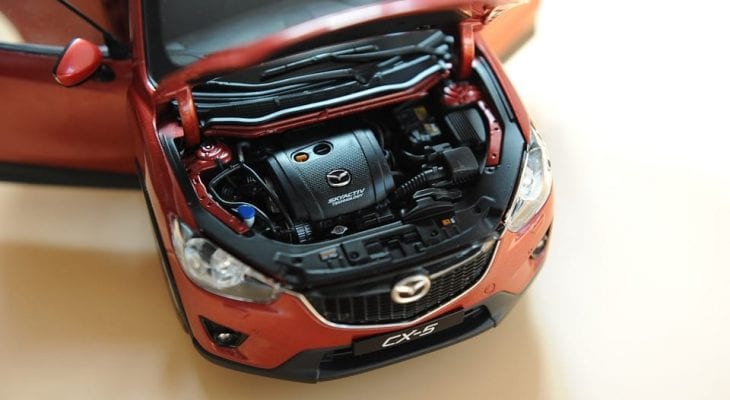 Stellantis zoomed 10.83% upon its Jan. 19 debut on the New York Stock Exchange as it climbed $1.65 to close at $16.88. The previous day, Stellantis began trading in Milan, Italy, where its ticker STLA replaced Fiat Chrysler’s symbol, and in Paris where it took the place of Peugeot SA. Stellantis CEO Carlos Tavares announced that the the merger ultimately would add $30 billion in value for its shareholders due to planned cost savings and reductions. 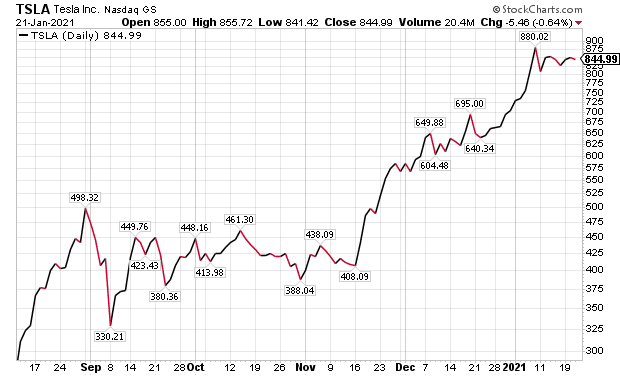 Even though original-equipment manufacturers (OEMs) have not received the revved-up valuation of Tesla, 2021 could turn into an important EV launch year for the incumbent auto makers, whereas the timeline for many EV start-ups remains 2022-23 and beyond, according to a recent research report from BoA Global Research. The disparity likely will result in a continued tug-of-war for valuation and capital from respective investors between legacy auto makers and new entrants, the report noted.

“GM and other OEMs have been fairly quietly investing in EVs in recent years while Tesla grabbed all the headlines,” said Bob Carlson, chairman of the Board of Trustees of Virginia’s Fairfax County Employees’ Retirement System with more than $4 billion in assets. “Many investors underestimated how serious the OEMs were about EVs.”

Investments and technology advances in EV now leave the OEMs, especially General Motors, in fine shape, said Carlson, who also heads the Retirement Watch investment newsletter. Innovation is starting to allow for development of reliable, affordable and mass-produced EVs in the coming years, he added.

Detroit’s General Motors and San Francisco’s Cruise announced on Jan. 19 that they have entered a long-term strategic relationship with giant software and cloud computing company Microsoft (NASDAQ:MSFT) to speed up commercialization of self-driving vehicles. The companies plan to bring together their software and hardware engineering, cloud computing capabilities, manufacturing know-how and partner ecosystem to create safer and cleaner transportation.

Microsoft will join General Motors, Honda and institutional investors in a combined new equity investment of more than $2 billion in Cruise, bringing the valuation of the latter company to $30 billion. The partnership is intended to spur commercialization of Cruise’s all-electric, self-driving vehicles and help GM realize further benefits from cloud computing as it prepares to launch 30 new electric vehicles globally by 2025 while creating new businesses and services to achieve the growth.

“Microsoft is a great addition to the team as we drive toward a future world of zero crashes, zero emissions and zero congestion,” said GM Chairman and CEO Mary Barra. GM’s share price climbed 9.75%, or $4.87 a share, to close at $54.84 after the Jan. 19 announcement. 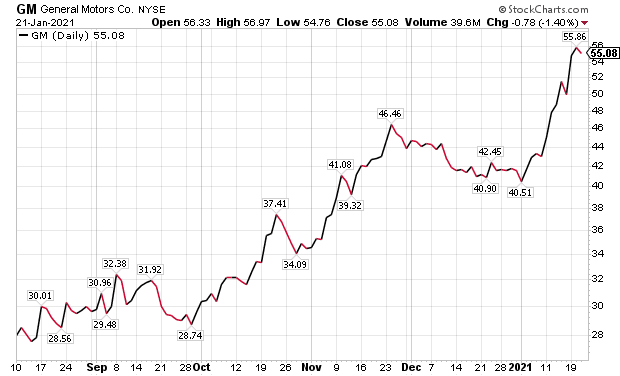 When the technology developments are combined with GM’s distributorships and long experience in production and marketing, the manufacturer has the potential to take a strong share of the EV market as it grows, Carlson predicted.

“GM’s stock rose quite a bit recently because of recommendation upgrades from a few analysts,” Carlson continued. “It’s probably temporarily overvalued. Longer-term investors would benefit from buying the stock after it retreats a bit.” 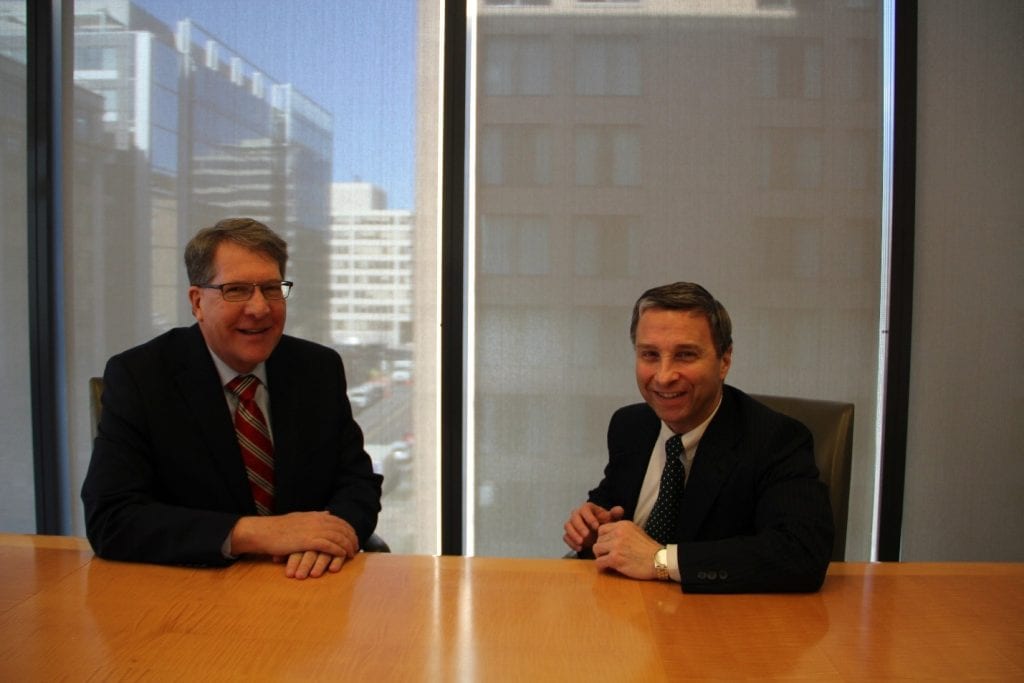 GM Put Options Jump 55.88% in Short-Term Trade as One of the Current non-Dividend-paying Automobile Manufacturing Stocks to Purchase

Seasoned trader Bryan Perry recommended selling naked put options in GM recently in his Quick Income Trader service and advised taking profits on Jan. 19 after they rocketed 55.88% in less than a week. That strategy avoided the need to hold a short position in the underlying shares of GM to let his subscribers instead go long in the stock to profit further from its ongoing ascent. As a result, his recommendation of GM’s stock is up by double-digit percentages in the same time frame. 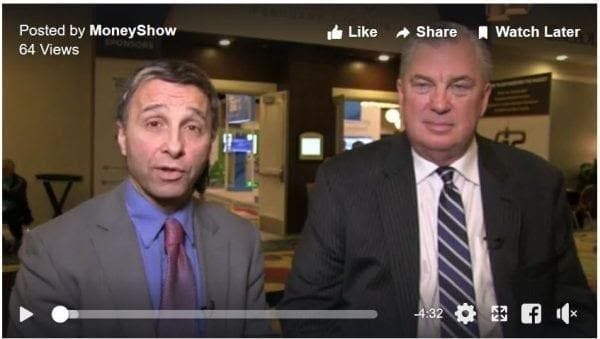 Perry, who also leads the Cash Machine investment newsletter, as well as the Premium Income, Hi-Tech Trader and Breakout Profits Alert advisory services, noticed GM shares tick up and recommended them on Jan. 13, when Nomura/Instinet raised its rating on the stock to buy from neutral and boosted its price target to $60 from $27. The upgrade followed revisions to GM’s powertrain electrification in the United States and China, aided by cost sharing with its Honda alliance and savings from North American restructurings.

GM also benefited from its Jan. 16 announcement of plans to bring production of its recently announced BrightDrop electric light commercial vehicle, the EV600, to its CAMI manufacturing plant in Ingersoll, Ontario. The automaker committed $800 million to support its goal of delivering BrightDrop EV600 in late 2021. The investment will allow GM to convert CAMI into Canada’s first large-scale electric delivery vehicles manufacturing plant.

Dearborn, Michigan-based Ford (NYSE:F) is a turnaround prospect for patient investors. The stock currently has 17 sell-side analysts following it with just four of them ranking it as a buy, one saying sell and the rest advising to hold.

Morgan Stanley’s auto analyst Adam Jonas wrote in late October 2020 that investors are becoming excited about the prospects of a strong product cycle, cost reductions and a more frugal and decisive strategic vision under Ford’s new management team. The investment firm rated the stock “overweight” with an $8 price target.

Ford blew past that target by more than 25% in just a few months. It may reward investors further in the months ahead. 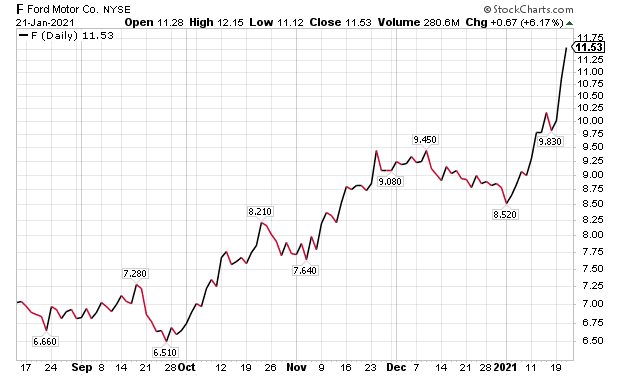 Ferrari (NYSE:RACE) currently is led by John Elkann, who serves as its chairman and has been interim chief executive officer since December 10, 2020. Elkann, a scion of the Agnelli family that controls Fiat Chrysler Automobiles NV, helped to orchestrate the creation of Stellantis and now serves as the parent company’s chairman.

Respected auto industry executives have been mentioned as possible candidates to head Ferrari, so investors willing to show faith in the selection process may be tempted to purchase the shares sooner rather than later. Otherwise, the price could rise just as it has with GM, Ford and other legacy automobile manufacturers. Income investors also may like the 0.57% dividend yield of Race. 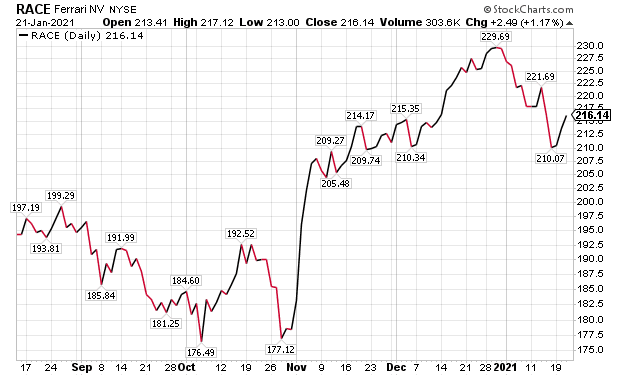 Toyota, a personal stock holding of mine for many years, is focused on becoming a leader in the EV industry, particularly in its home market of Japan. Its price dipped recently when it announced on Jan. 14 that it would need to pay $180 million to settle a U.S. government investigation into delayed disclosures on emissions-related defects.

Toyota also offers a dividend yield of 2.80%, aside from a chance for capital appreciation once it resumes its usual upward trek. The automaker ranks among the top two largest companies in the industry, with Volkswagen and its global operations in the lead. 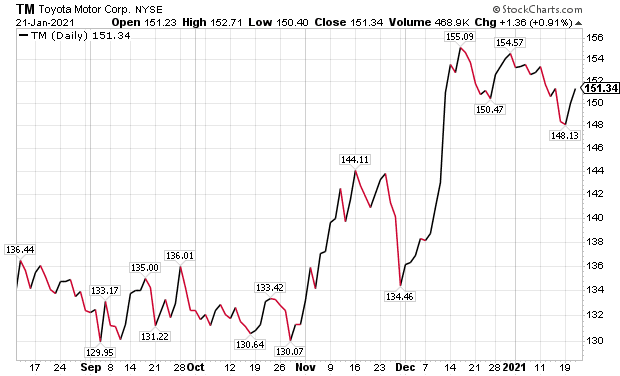 Volkswagen, currently paying a 2.64% dividend yield, also aims to become a worldwide EV giant, but its best chance to earn big market share will be in Europe where it has many of its leading auto brands. The company’s acquisitions give it a global footprint and it has pledged to invest $86 billion to develop electric vehicles and other new technologies during the next five years as it seeks to rival Tesla in the EV marketplace. 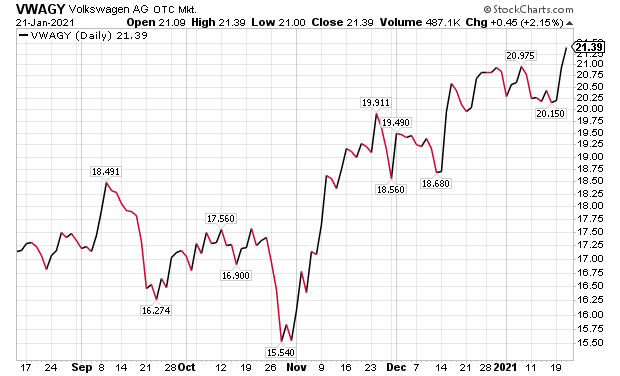 Volkswagen’s EV ambitions remain to be realized. One of the last upgrades of the stock occurred on Dec. 15 when Bernstein boosted its rating to “market perform” from “underperform.” The stock is worth tracking and considering for investment later this year if its trajectory heads forward with any sustainable momentum.

Honda gained headlines on Jan. 7 for an expected cut to vehicle production due to a semiconductor supply shortage. With autos requiring computer chips for their increasing use of technology, that news preceded a recent dip in the company’s share price. Honda also offers a 2.84% current dividend yield. 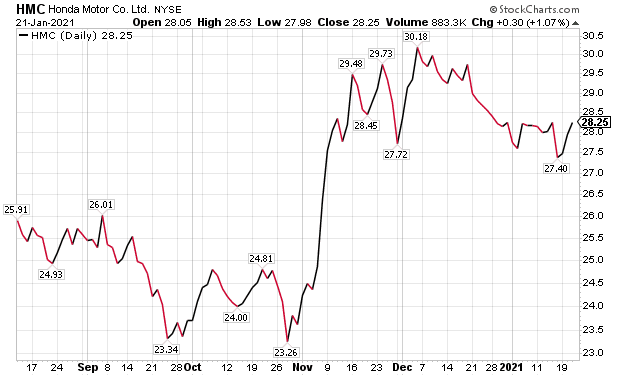 Patient investors may want to hold back on buying Honda shares until that situation is remedied. The company’s EV technology development alliance with GM will save it research and development (R&D) money but the costs still will be mammoth.

“I’ll be honest: there are too many companies around the world hoping to be the next Tesla and their efforts to capture even trivial market share will ultimately leave investors poorer,” said Hilary Kramer, who hosts the nationally aired “Millionaire Maker” radio program and heads the GameChangers and Value Authority advisory services. “While the vehicles are often great and the business models are well thought out, none really have the Elon Musk reality distortion field on their side, which is what they need to raise enough cash to reach sustainable scale before the market matures. Meanwhile everyone in the traditional auto industry is racing to their own electric models.”

Kramer predicted the winning vehicle manufacturers will become leaders in their home markets, rather than global juggernauts. For example, expect Volkswagen and Renault (OTCMKTS: RNLSY) to dominate in Europe, while Nissan (OTCMKTS:NSANY) and Toyota will lead the Japanese EV market, she added. Income lovers will appreciate the dividend yields of 2.64% for Volkswagen, 6.48% for Nissan and 2.80% for Toyota. Renault is among the automakers that suspended its dividend amid the COVID-19 crisis.

“China is an open question, but if Tesla is facing more savage local competition, the next generation of western manufacturers is going to have a much harder time establishing themselves,” Kramer said.

For investors who want to buy shares in auto stocks, Kramer suggested ignoring the power sources and focusing on overall sales.

“With that in mind, I like GM for getting serious about plug-in cars while keeping one foot on the old gas-fueled market,” Kramer said. “Ford is relatively resistant to EV competitors but isn’t necessarily a strong buy right now either. And Tesla, of course, is Tesla. You either own it or you don’t. What I say won’t change your mind.” 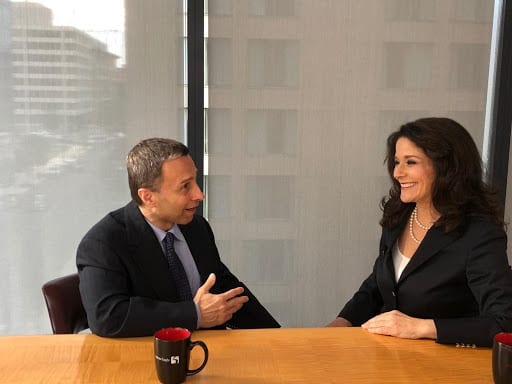 The COVID-19 pandemic remains a drag on automobile sales amid reduced driving and many workers not heading into offices since last March. I personally am among those who have opted to walk to stores within a mile or so of my house rather than drive my car for such short trips.

COVID-19 cases have reached dreadful levels and keep climbing unabated as a second surge remains in full swing. The number of cases hit 24,633,790 and led to a tear-inducing 410,383 deaths in the United States, as a massive part of 97,629,138 cases and 2,093,948 deaths worldwide, as of Jan. 22, according to Johns Hopkins University. America has the dubious distinction of facing the most cases and deaths of any country.

The dividend-paying automobile manufacturing stocks to buy this year include a “Who’s Who” of legacy internal-combustion engine car builders that aspire to join Tesla as long-term EV leaders. The competitive landscape will consist of obstacles and challenges that the strong and innovative must navigate but the marketplace could be cruel to those that lack the funding, visionary leadership, technology and engineering skills to survive.